This month’s walk is to the Buckland Gorge on the East coast.  After recent rain the temperature was expected to be mild on Sunday 27 September 2020 with promises of sun to warm up the day.

The walk was organised by Bob and we had Wayne, Gerwyn, Greg, Anne, Kat, Angie, Bob and Lyn.

We set out from Hobart on the A3 at 9.30am.   At Buckland you turn left on Buckland Road and travel about 11kms to Cutting Grass Road intersection and the start of the walk is about 600 metres past that on the edge of a cleared paddock. There are a few small areas to park on the side of the road and they are all taken today! 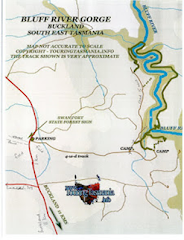 From the road you take the 4WD track to the east, with the field fence line on your right hand side.

Keep going right at the sandy fork and after about 25 minutes you need to find another turn to the right to take you down to the edge of the Gorge.  It can be easy to miss but look for the coloured tags which were noted to be fading.  The track descends into the Gorge and takes you along the left side of it.

Soon you will come across the hidden sandstone cliffs and rock caves swirling with colour above and below. The Gorge is beautiful with fascinating rock sculptures and similar to the Painted Cliffs on Maria Island which is apparently part of the same rock formation. 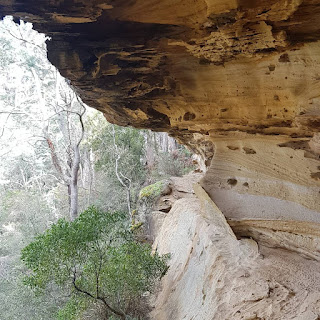 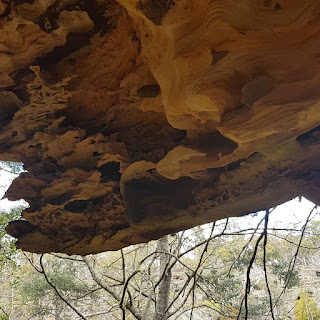 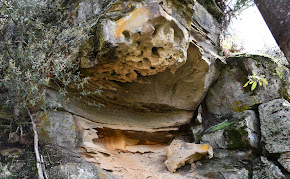 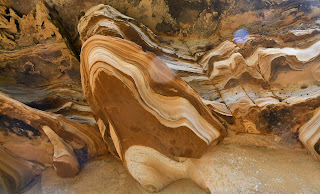 The track hugs the cliff and is narrow and  steep in places so care needs to be taken. There were little water showers cascading over the rocks above. 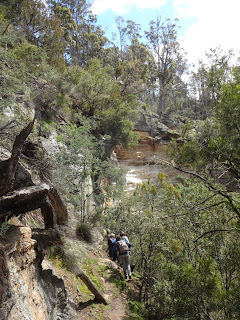 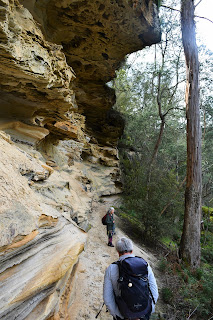 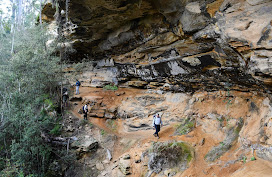 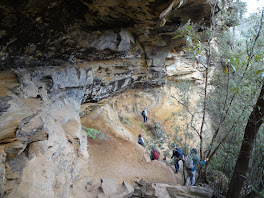 The track descends to the Bluff River and then ascends the cliff again.  There is a fine headland which gives great views over the Gorge, a good place to stop for lunch. We had lunch on the grassy knoll overlooking the river far below 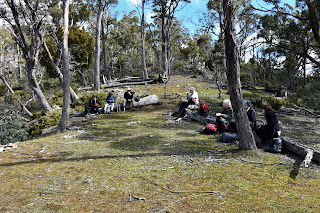 The gorge is a refuge for wildlife and today we saw plenty of birds and an echidna. 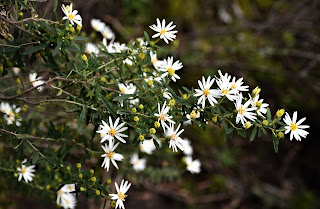 Watch out for stinging nettles as we encountered a few and Angie thinks she found a rare variety amongst them.

From the top of the cliff it is a very short distance back to the west to pick up the dusty 4WD track which takes you back to the road in about 20 minutes. 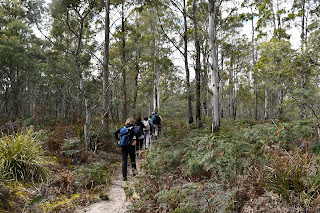 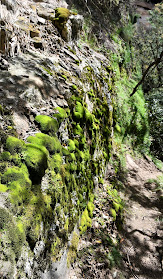 The walk is approx 8-9kms circuit along the east side and took us a bit less than 4 hours with a few breaks and taking plenty of time to marvel at nature’s spectacular display.! 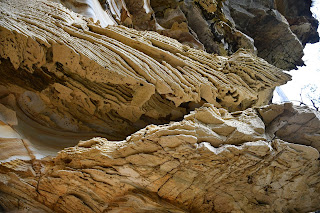 This month’s walk was the South Cape Track and so we decided to make a weekend getaway at Southport. Caroline found us some grand accommodation at the historic Jetty House, Southport which sleeps many and very comfortably catered for our group of 11; Caroline, Warren, Gary, Rachel, Kat, Philip, Wayne, Gerwyn, Bob, Angie and Lyn.

We travelled from Hobart through the lush Huon Valley on Friday 28 August taking about 1.5 hours and arriving mid afternoon. There was a favourable weather forecast for the weekend and so we took advantage of the afternoon sunshine to set out and explore Southport bay which opens to the Great Southern Ocean.

This bay was part of the indigenous Lyluequonny (Pangherninghe) people’s country. These days Southport consists mainly of shacks for Tasmanian’s and home to a handful of farmers and fishermen. Southport was an important town for timber and boat building and for shipping local industry exports with water access via barges to Hastings Bay and Lune River. Southport also played an important role in serving the whaling enterprises of early colonial settlement. Kelp was harvested and dried on the small island known as Dead Island, in Southport Bay.

After our stroll we caught up with everyone’s news over drinks and some of us walked up the road to the Southport hotel for dinner. As it was Gary’s birthday and Caroline had made a delicious carrot cake to celebrate, we all had some cake for dessert!

The plan was to walk the South Cape Bay Track the next day, Saturday 29 August. The South Cape Bay Track starts at Cockle Creek, which is about 25kms further south on Hastings Caves Rd at the end of the most southern road in Australia within the Southwest National Park. We headed out at 9.30am after a leisurely breakfast. The road is not sealed most of the way and takes about half an hour.

The Southwest National Park is part of the Tasmanian World Heritage Wilderness Area. Todays walk is one of Tasmania’s Great Short Walks and forms the very last section of the South Coast Track, which is a challenging 85km hike from Melaleuca in the southwest corner of Tasmania where hikers get dropped off by plane or boat to start this remote wilderness trek. 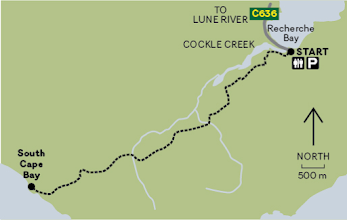 There are no roads past the carpark at Cockle Creek.  The walk begins from behind the Rangers station. 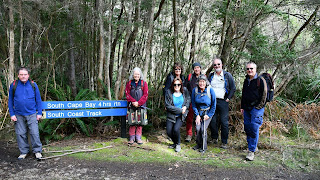 The trail first skirts Cockle Creek, where the walker’s registration box appears and then heads through rainforest.

For the next 3km the trail scrabbles over the gentle rocky slopes of Moulders Hill before opening up onto duck boarded marshlands. Due to recent heavy rain parts of the track were very muddy.  But thanks to the duck boards, the walking through the marshy Blowhole Valley is easy and the next few kilometres are quickly covered.

The trail then climbs along several gentle hills, through ferns and small trees where we encounter more mud.

You can hear the roar of the ocean before you can see it but the trail soon emerges onto the rugged dark cliff top surrounding South Cape Bay.

This cliff top section of the trail is enticingly beautiful. The barren grey rock stands in stark contrast to the lush forest. From here, you can see the entirety of South Cape Bay, the southern tip of Tasmania. It has views of South East Cape to the left, the most southern point of mainland Australia. 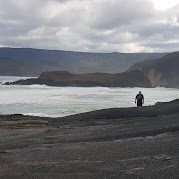 And, off in the distance to the right you can see Lion Rock; a rock formation emerging from the ocean that looks like a lion at rest.  The turbulent ocean is occasionally riddled with surfers however today there do not seem to be any out.  It’s a rare day when the wind isn’t howling but today is calm enough to be able to have our picnic lunch on the rocks in relative comfort.

Continuing down onto South Cape Beach via the staircase provided on the far side of the cliff face is highly recommended.

Here you can wander along the sand and look at what the wild ocean has washed up, enjoy the remote and secluded beach or if the tide is right, walk out to Lion Rock. There are toilets in the campground inland near the creek leading onto the beach.

Conditions did not allow us to take the steps down to the beach today. The tide was high on the beach below. So after ample time to marvel at this wild and remote place it was soon time to return via the same route to Recherche Bay.

The 15.5km walk took about 5 hours including all breaks.  Once back to Cockle Creek some of us relaxed in the sun on the beach including wading into the sparkling water to cool down the muscles!

An enjoyable walk in the wilderness (despite some heavy going in the mud) and now everyone was keen to get back to our accommodation for showers, drinks and another delicious shared meal  well organised by Kat. 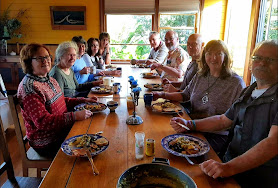 Sunday was a beautiful sunny morning to share a fabulous breakfast cook up at the House. Even with a generous late check out we were keen to get on our way to other planned activities before the scheduled wind started. Unfortunately, the tide was not right to do the Fishers Point walk and Duckhole Lake was closed due to track upgrading!

Nevertheless, it was another lovely weekend away with friends enjoying everything Tasmanian!Can't wait to do it again!.