We (Lyn, Sophie, Philip, Kat, Robert and Di) were some of the first walkers to check out the new trackwork on the Cape Hauy track, which has recently been renovated as part of the developing Three Capes walk.  We found it to be first class, apart from some recent little washouts due to recent heavy rains, and some of the trackwork gear was still sitting on the track waiting to be helicoptered out.  There is a LOT of new stonework, including a dear little stone bridge, and kilometres of expertly made steps. In fact, there were 2019 stone steps, as counted by Philip!  The weather held out for us, with some small showers just missing us.  The views around Fortescue Bay and up and down the coast were fantastic. 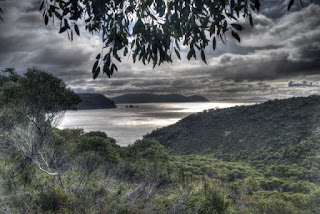 Pristine and stunningly beautiful, what more can we say?

The walk:
This is now an 8 km walk, and still takes 4 hour return.  NPWS rate it as Grade 4:  "Bushwalking experience recommended.  Tracks may be long, rough and very steep.  Directional signage may be limited".  We can attest that it still warrants that Grade - on account of its steepness!   There are lots of ups and downs. Hearts and knees are tested.  We met at Fortescue Bay, in the carpark near the boat ramp at 10.30, set out just before 11am and were back just before 3pm. 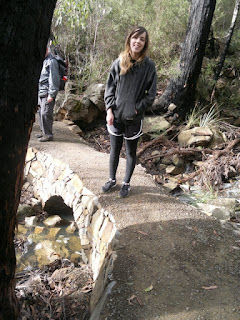 Just out of Fortescue Bay we met a pademelon, lolling back, quite at ease, next to the path.  Soon after we came across a couple of Forester Kangaroos.  Fantastic!  The walk rises through a variety of heath and woodland, where Kat spotted some robins,  and levels off for a while, before coming to the magnificent views over the Cape.  From there the track dives down (and up again!) across the headland.   Here we spotted some New Holland Honeyeaters and a pair of Black Cockatoos. 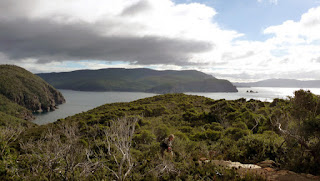 We had a picnic lunch at the Cape, overlooking the mighty dolerite Candlestick, the Mitre Rock and looking out to the Hippolyte rocks. 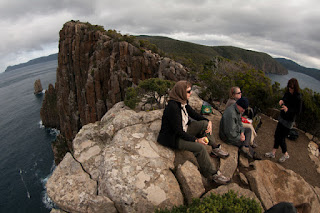 The spectacular dolerite columns and cliffs at Cape Hauy are popular areas for climbing and abseiling. 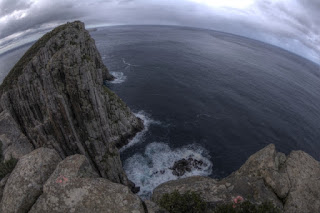 We limited ourselves to gawking at the cliffs and the blue crashing seas far below. 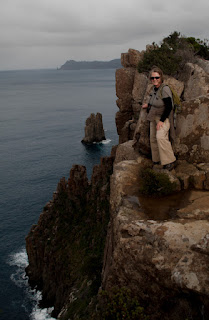 The walk back was pretty long and steep, climbing back up to the headland and then descending steadily back down to Fortescue Bay.

We tried to give some business to the Blue Seal cafe at Eaglehawk Neck on the way home, but apparently their "Open" sign doesn't mean much(!).  The Dunalley Waterfront Cafe was an excellent choice for view, service, and quality coffee, tea and Two Metre Tall ale. 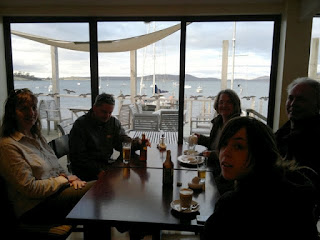 However, there were after effects...  I think we all suffered for the next few days from sore calves from all the steps!

Getting there:
Take Arthur Highway (A9) to the junction with Fortescue Bay road (C344), which is 4km south of Taranna and 4km north of Port Arthur. Turn into C344 and drive 12km to Fortescue Bay. This road is an unsealed forestry road and not in great condition, but is OK for 2WD vehicles and mountain bikes. It is a 90 minute drive from the city to the carpark.  Note: National Park car stickers/membership is required.
Posted by Di E