Three of us (Angie, Bob, Di) set out to investigate this walk, which is listed as one of Tasmania's Great Short Walks. Hobart Walks [published by Hobart City Council] describes it as being of Moderate difficulty (i.e. some sections may be demanding for people with fitness/experience or without appropriate walking equipment), length about 9km, and taking about 4 hours.  We did the circuit in the anticlockwise direction described in this booklet, thinking that the steep section below the Chalet would be best experienced (by people like us with dodgy knees) going uphill rather than downhill. 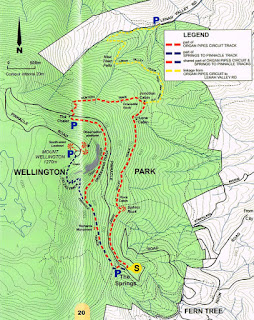 We had a lovely spring day for it, and the mountain was buzzing with road cyclists, off road bikers, walkers, rock climbers, motor bikers and driving tourists.  We parked at the lower carpark at the Springs, and found the Great Short Walks sign just above the toilet block.  It was about 10.20am when we headed off from here on the Lenah Valley track, which was well formed, gently graded, nice fine gravel under foot, leading through lovely mountain bushland with occasional glimpses of the river down below.  There is a slight diversion to the right, through a childproof gate, to Sphinx Rock.  This is a must see - there are glorious panoramic views over greater Hobart and well down the river. 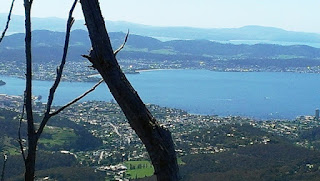 Back onto the Lenah Valley track, we passed Rock Cabin and skipped the minor diversion (downhill) to the right to see Lone Cabin.  We reached Junction Cabin, which now finds itself at the junction of at least six well used tracks.  The new North-South mountain bike track goes through this point, and seems to be very popular. 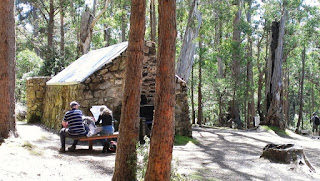 We had a fortifying snack and headed off at about 11.35am, up Hunter's track.  This track goes steeply up to Crocodile Rock, and then across several rock screes. 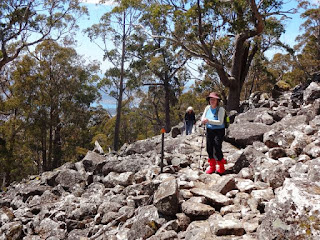 There are several more uphill sections before you meet the junction with Old Hobartians Track.  Here you turn left and head quite steeply up the hill, shortly reaching the Pinnacle Road near The Chalet (1000 m above sea level).  Pure mountain water is still available here through a handy tap next to the road. 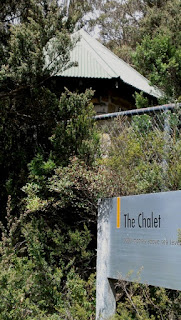 We reached The Chalet at 12.50pm and had a very welcome lunch, sitting on the rock steps in the warm sun.  From there we took the Organ Pipes track, which leads slightly uphill but then is basically level around the east side of the mountain.  This track was surprisingly under maintained, with little effective drainage, meaning that most of the track was basically uneven rock.  Views down the mountain were fantastic. 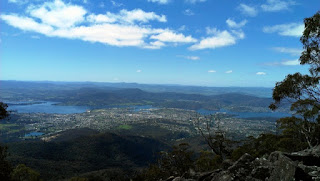 Then we gaped in awe at the magnificent dolerite Organ Pipes. 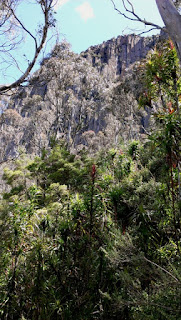 We saw a couple of climbing groups picking their way up the dolerite columns. 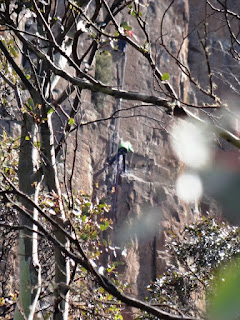 After the Organ Pipes this track began to pall a little. Luckily there were some lovely spring flowers to focus on, like Richea dracophylla: 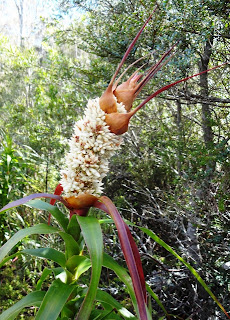 and this one, what is it called? 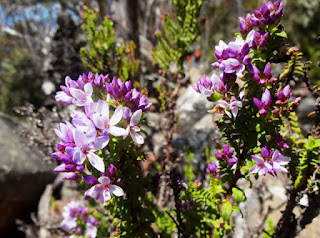 So the loop took us 4 hrs and 50 minutes, including snack and lunch stops.  We think taking it in the anti-clockwise direction was the right choice.  Stiff soled walking shoes or boots are essential for the rock-hopping.  A significantly shorter circuit, but including the key features of Sphinx Rock and the Organ Pipes, can be made by heading up the Sawmill Track not long after Sphinx Rock.  This shorter loop would probably take about 2 hours.

Angie and Di made an additional visit to see a spectacular Telopea truncata tree at the end of Bracken Lane (off Pillinger Drive) - incredibly large specimen with luscious flowers! 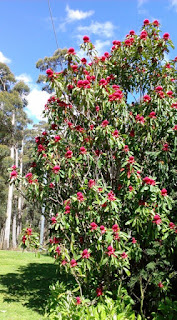