Wondering about the forecast for a cold front coming over in the middle of the day, we headed off in gorgeous sunshine to the Tasman Peninsula.  There were 7 of us for our walk to Tatnells Hill i.e. me, Robert, Kat, Philip, Bob, Catherine and Peter.  It took just an hour and a quarter to get to the Waterfall Bay carpark from the city. 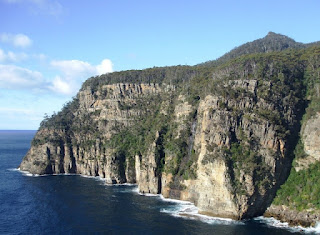 After our first look at the beautiful bay, we kitted up for the walk. We had been warned there were leeches on this walk, so most of us had gaiters on today.  Everyone was impressed by Robert ‘s and my gaiters (now possibly collectors' items) which were designed to snugly wrap under and around our boots.  Nothing was going to get through there!

We headed off at 10.30am, via the track starting on the northern side of the carpark.  We followed the clifftops for about 15 minutes to Falls Camp, where the waterfall careens down the rocks. 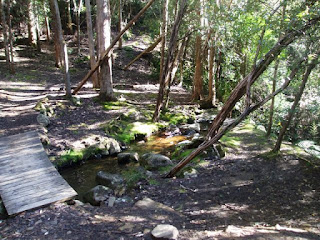 We took the side trip to Waterfall Bluff, which was a lovely leaf littered, level walk through pretty bushland along the clifftops.  There were fantastic views out over the sea and to the north along the way. 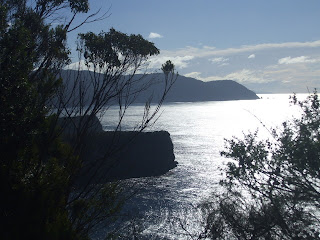 We saw no whales, unfortunately. 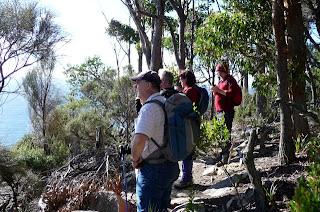 At the Bluff, there were excellent views south to Cape Huay, scene of one of our recent walks. 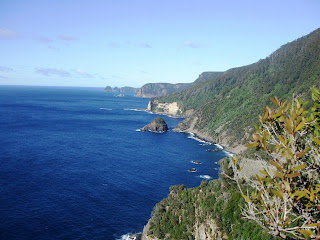 Back near the Falls Camp, the sign pointed the way upwards towards Fortescue Bay and Tatnells Hill. The track climbed steadily and fairly steeply up the valley, criss crossing the creek, through wet rainforest, with its resident leeches taking some interest as we passed.  Near the top of the ridge we passed the side track to Clemes Hill on the left – this was well signposted.  Soon after this we reached the more open ridge walk, and the open tops of Tatnells Hill at about 12.30pm. 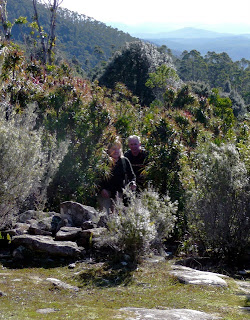 At the top there were some large flat rocks, perfect for sitting in the sun, enjoying the view and eating our lunches.  The views were out to sea and to the north.  It was too high to imagine one could see whales from there!

We returned the way we had come, with Kat battling to make my walking pole work properly.  We decided in the end that it was cheap and nasty, and I was glad that Robert had found a sturdy wooden stick for me instead.  The walk back seemed much faster somehow, certainly more enjoyable than the upward track, and we were back at the carpark at 2.30pm, just when the skies opened up.  What good timing!

Once again we were confounded by strange signage of cafes.  The Dunalley Waterfront Café had its collapsible sign out on the highway, but we actually found it closed. WTF? Plan B was the Dunalley Hotel, inspiring by its quality of service and food (not).  The beer was fine, though.

Post walk reports:
Robert found evidence of a leech attack on his shin!
I had no pain in my knees the next day - proving to myself that using a (good quality) walking pole/stick to take some of the weight is very useful.