This brand new "icon walking trail" has only been open since December 2015, and Tasmania's Parks and Wildlife Service did an excellent job promoting it in the leadup.  Many of us locals pooh pooh the idea of gentrifying a walk that is already familiar to our keen bushwalkers, and others baulk at the entry price.  But this walk, with its well engineered tracks and carefully supported campsites, suddenly makes Cape Pillar accessible to those of us who are not up to the challenge of the long one day return walk from Fortescue Bay (posted as 10 hrs return) or the carry-all-gear two night camping trip option.  So tickets to the Three Capes Track became Di's Christmas present to Robert.

When booking in December we had selected a free four day window in our early autumn calendar, and all of a sudden it was upon us.  There was a last minute scramble to unearth the long unused camping gear.  This is when we discovered we didn't know where one of our sleeping bags was and also we didn't have two backpacks of the right sort of size (they recommend 50L packs).  Some last minute repairs to packs and gear were required, and thanks to Sally and Jeff for the loan of a sleeping bag and cute camping pillows!

Our camping planning skills were a bit rusty.  In fact we worked out that our last camping trip had been an attempt on Cape Pillar in 2003, in the company of Andrew Windle and others.  That trip was thwarted by fires, which on arrival at Fortescue Bay we discovered had resulted in the closing of the Cape Pillar track.  Plan B was a walk north to Bivouac Bay, a nice little camp but it rained that night, and we beat a bedraggled retreat home the following day.  We were probably saved a wet and uncomfortable ordeal on Cape Pillar!

For our 2016 attempt we set out with the prospect of four days of excellent walking weather (so lucky!).  We had selected the first ferry to the start (11.30am, you can also choose a 2pm departure) and arrived at Port Arthur in good time.   Entry to the Three Capes Track experience includes a day pass to Port Arthur, so for many people it would be a good option to spend the morning sightseeing at Port Arthur and then catch the 2pm ferry.  Extra bonus - on checking in, we were given a Ticket of Leave, which gives you two years' free entry to Port Arthur - that was a nice surprise.


We were met at the ferry by two of Rob Pennicott's well trained boat crew (Kane and Drew), and were treated to over an hour of enthusiastic introduction to the waters and wildlife of Port Arthur.  This gave us all some good context to the cliffs we would be walking on and looking over for the next four days, and also demonstrated the strong conservation ethic of the walk.  We sighted Cormorants, Gannets, a pair of nesting White Bellied Sea Eagles, and two types of albatross - Buller Albatross and the Yellow Nosed Albatross. 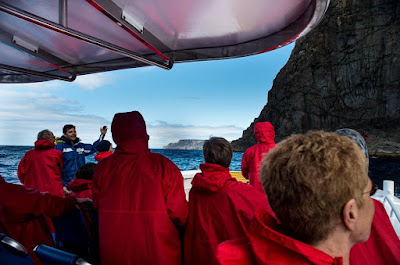 We were neatly landed in pretty Denmans Cove, where most of us stopped for our first picnic lunch before setting out on the track.  As we started the walk it became clear that we were going to be treated to a curated experience, with quirky, thought provoking sculptures and seats dotted along along the trail.  The Three Capes Track handbook we had each been given proved to be a mine of interpretive information, and the rest spots served as clever hooks for questions and answers on what we were seeing. 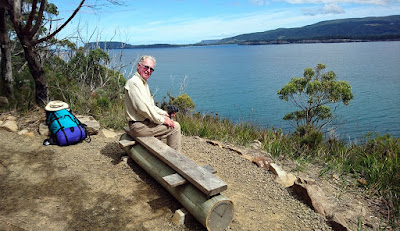 No gaiters required! The track has been carefully designed to provide sound footing and easy grades, and it is often possible for two to walk side by side.   A major driver for this is to keep walkers on the path, to avoid damage and risk of infection of the pristine bushland.  As the path is so good, you don't need to scrutinise the path for tree roots and potholes, you can just enjoy the view. The track is one-way, heading south at this point. 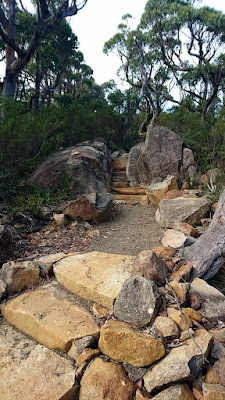 Day 1 is an easy 4km, and after about an hour we suddenly arrived at an amazing sight.  The first campsite, Surveyors, materialised from the bush more like a wilderness resort than a hut, with our host ranger waiting on the steps to meet us.

Sam welcomed us, explained how the site works and showed us to our rooms (four bunks to each).   The huts have been superbly designed by Hobart architects JAWS - stylish, modular, well made with quality materials, and completely contemporary.  They are equipped with modern kitchens, pots n pans, utensils, USB (only) charging, wide decks, communal hubs, small informative libraries and toilets. Note - no showers (except at Munro where you can try the cold shower).  Each campsite accommodates up to 48 walkers, in two hut modules.

We had most of the afternoon free to relax, read, and introduce ourselves to some of our fellow hikers.   Cabin companions are kept constant throughout the walk, as the cohort of walkers moves on together, and we were pleased to be rooming with friendly and easygoing Mike and Linda, originally from Phoenix Arizona but who now spend their lives travelling. Over the four days....

Day 2 was an 11km walk to Munro camp, which took us 5 hours.   We took it easy, enjoying the views and the artworks along the way.  The birdlife was busy and loud but hard to spot in the dense bushes.

At three hours we found some rocks with a view, just right for our gourmet lunch of Tom on crackers, followed up with Nashi pears and scroggin.

At four hours, we got to the junction to Cape Pillar. Here the inbound track for walkers from Fortescue Bay also enters.  On the Saturday that our group of about 38 walked to the Cape, we only saw three non-paying walkers - two were doing the long day walk, and one was camping at Wughalee Falls. 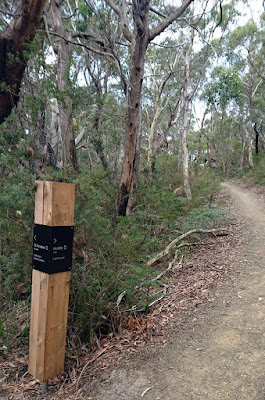 Munro is the busiest campsite of the track, and also the most striking.  It features a fabulous deck overlooking Munro Bight, offering perfect views towards Cape Raoul and Maria Island.  A steady sea breeze seems to blow up the cliffs onto the deck.  Once again, we had plenty of time to relax, chat, read, wash clothes.  Some people went off and did an extra loop walk around the site. Ranger Robin read us the riot act at the 6pm briefing on do's and don'ts which will ensure minimal impact on the pristine natural environment. 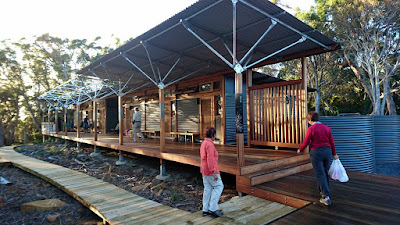 Day 3 - the sunrise from the platform lookout over Munro Bight was fantastic.

We set off at a leisurely 9.20am!  As we were to pass back through Munro later that day, we left our backpacks here and set out with just a daypack, carrying water, lunch and a jacket.  It was a long day but a great experience, passing through a wide range of vegetation types, and we stopped for every view.   The sensitive heathlands are now well protected by kilometres of duckboard. 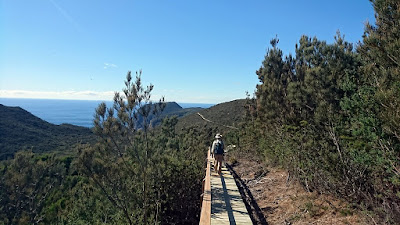 Hurricane Heath wasn't too windy that day, and (the now protected) Perdition Ponds were looking pretty dry.   Soon the path was edging along the clifftops, with spectacular views coming thick and fast.  There was time for a midday snack of nashi pears and scroggin.

Tasman Island looked remote and romantic.
After a look at The Blade from the "Seal Spa" lookout, we climbed it - it was steep, exposed and a little scary: 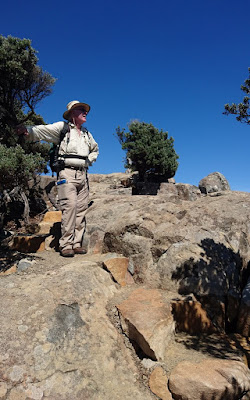 But what a triumph to get to the top! 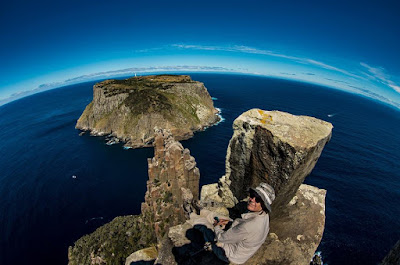 There are NZ and Australian Fur Seals on the rocks at the bottom of Tasman Island, and some were having a great time splashing around in a large rockpool.

We celebrated by having lunch on The Blade, and lingered as long as we could before heading back at 1.30pm , ready to enjoy the track from a different perspective.
At Munro we quickly repacked our backpacks, loaded up and set out for Retakunna, which we reached a bit over an hour later.  In total we were on the track for seven and a half hours that day, walking the 17 km, and were pretty buggered.

Retakunna was a pleasant relaxing camp.  Although it didn't have spectacular views, the surrounding trees were full of birds.

Day 4 - more than half the group left very early so that they would be in time to catch the 2pm shuttle from Fortescue Bay back to Port Arthur.  We were the last to leave (at 8.50am), taking it easy  and had time for a good chat with Ranger Donna-Lee.  She was very impressive, being outgoing, friendly and kind on top of having the mandatory custodian-type ranger's skills.

We walked up Mt Fortescue, a long climb through a delightful moist myrtle forest.  After an hour's walking we reached the top and we found we were in a cloud.  It even rained slightly.

The track along the ridge toward Cape Raoul was fairly easy and offered more great views over the sea.  The Pillars of the South stop gave a great view of Mitre Island.  Our last gourmet lunch was on the clifftop, looking back to Cape Pillar, marvelling that we had walked all that way. 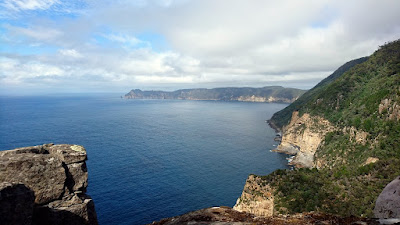 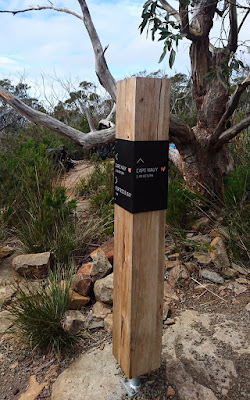 Note - there is no invitation to head to the right, as the Three Capes Track is one way only, northwards, on this stretch.

Walking from the Cape Hauy turnoff to Fortescue Bay we could see the slight deterioration in the track since 2012, and we realised how spoilt we had become in our first three days on the Three Capes Track!

It was lovely to finish (hurrah!) at beautiful Fortescue Bay (2.15pm).  Sadly the end of trip facilities in the run-down carpark were a bit of a let-down, although that didn't bother those walkers who still had the energy to go for a swim.  The 4pm shuttle bus zoomed us back to Port Arthur to pick up our car and head home for that gorgeous hot shower.

The Three Capes Track was a great experience, and we thought the current four day/three night option was just right for us.  They will be starting construction on the Cape Raoul extension in a few months, so in a year or so it is likely that the only option available will be the full six day/five night experience.

Only Telstra gives a reasonable phone reception in the area.
Take a good book for extended reading pleasure in the quiet afternoons.

Details of the walk and facilities fees are here: www.threecapestrack.com.au.  If you are walking to Cape Pillar, by whatever route, I recommend getting the Cape Pillar walks map in advance.  You can get it as a digital download from Tasmaps, and probably also a hard copy from map sellers.