Easter Saturday was a beautiful late summer day this year.  Bob, Julie, Angie, Robert and I set off from our place at about 9.15am.  Robert and I took Wanda - this was our second overnight trip in our new freedom machine.

It was the first time we had visited the Tasman Peninsula since the disastrous January fires.  As we passed from Forcett through to Dunalley, the evidence of the losses was sobering.  We saw quite a few of the houses that had been burnt to the ground, some of them with tents where the owners were making plans to rebuild.

Of course all the residents had been affected by the scale and terror of the event.  The community is still focussing on rebounding, as evident in a number of chirpy chalkboard signs in Dunalley, and there was a community meeting being held that day at Eaglehawk Neck.

The locals must have been pleased to see the amount of traffic coming into the Tasman Peninsula.  When we got to the recently extended carpark for Cape Raoul and Shipstern Bluff at about 11.10am, we were amazed to find it full!

Along with enlarging the carpark, the authorities have changed the start of the Cape Raoul and Shipstern Bluff tracks.  There is now an official entry point leading off from the carpark, with signs, wowsers! 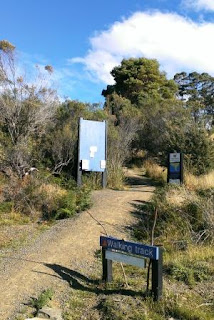 There is a good description of the Shipstern Bluff walk in Peter and Shirley Storey's "Tasman Peninsula Tracks", although the recent works on the carpark and the start of the track have changed a few things.  They describe the walk:   "This walk gives participants a close-up of the effects of the action of the sea in forming huge rock platforms, sea caves and tunnels on the exposed southwest coast of the Peninsula.  Try to synchronise your walk with low tide if possible".  Huh!  Of course we had scheduled our walk before learning of the importance of the tide.

We set off at 11.45am.  About 15 minutes in we passed into the Tasman National Park. The Storeys describe this bushland as: "semi-open forest of Stringybark and Blue Gum with an understorey of Bedfordia, Silver and Prickly Wattle and with a ground cover dominated by thickets of Cutting Grass".  At 30 minutes in, we reached the T-junction where the track to Cape Raoul goes off to the left, and the track to Shipstern Bluff goes off to the right.   The track to Shipstern Bluff passed through light, open forest with low growing eucalypts, and the track was dry, sandy and fairly level.  In other words, it was a great track for walking.   There were masses of Banksia Marginata (Silver Banksia), now in flower, which was nice, and low growing heath-type plants.

In another 15 minutes (12.30pm) we were at a set of fantastic clifftop lookouts looking down towards Shipstern Bluff (no barriers, so watch out for any children on the walk).

And what a treat - the surf was up!  We were delighted to see a dozen intrepid surfers bobbing around waiting for the incoming swells to turn into the famous huge curls and pipelines which then crash onto the dangerous rocks at the base of the bluff.  There were several jet skis in attendance, towing the surfers out to find better waves. 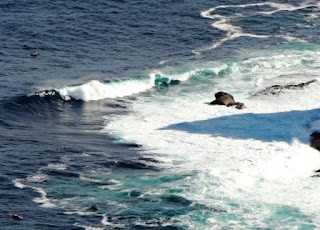 This lookout was a halfway point on the track (so, at only 45 minutes from the carpark, this is a great short walk if you should hear that the surf is up - take your binoculars!).  After enjoying the view for a while, we continued along and down the hill towards the Bluff.  This part of the track was fairly steep but still easy walking (downhill).
At 1.15pm we reached the next T-junction on the firetrail on the Shipstern Bluff ridgeline.
You would turn right here to go to Tunnel Bay.  We had been hopeful of fitting in this side excursion today, but we ran out of time.  Too bad, as the Tunnel rock formation looks magnificent (another trip!). We turned left and headed along the wide sandy trail, through masses of teatree, a lot of it was in flower (great for the bees, unfortunately we noticed a few wasps and bumblebees instead).

Most walkers like to rockhop around the base of the Bluff and admire the rock ledges and the power of the sea. But as Lyn had warned us, when the tide is high, it is dangerous to try to get around the Bluff at the waterline.  Of course, at the time we arrived, it was high tide, so we had decided to skip the steep scramble down to the beach on this occasion.
We managed to get halfway down the last section to the beach before realising we had missed our turnoff on the firetrail, so we ambled back up again to find the smaller side track to the western side of the ridge. 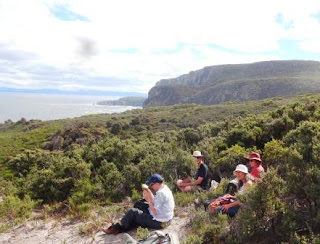 While we ate (and dodged wasps), Bob made the effort to wander further down the track to get this view to the west towards Tunnel Bay.
The return walk back up to the lookout wasn't too hard, and we were able to notice more of the plants and animals than on the way down.

Even on a peak holiday, with the surf up, the track was uncrowded.  The people we met on the track, family groups, tourists and mad surfers, were all friendly and clearly enjoying their day. At the lookout we were rewarded with seeing surfers shooting the tube, fantastic!
Finally tearing ourselves away, we made it back to the carpark at 4.15pm, making our walk a total time of 4.5 hours.  Well done to Jules, who had thought she wouldn't be able to complete a walk that long! 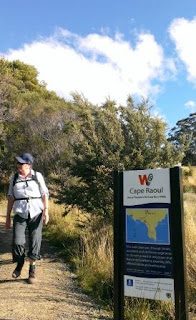 Robert had prepared Wanda with chilled champagne and gourmet treats to celebrate the conclusion of our very enjoyable walk.  We toasted our good fortune at living here in Tassie, where such unspoilt beauty is still so accessible.

Getting to the start of the Shipstern Bluff and Cape Raoul tracks:  from Port Arthur, take the road toward Nubeena, travel 8.5km.  Just after a bridge, turn left in the direction of Highcroft and Stormlea. There is no sign for Cape Raoul here, surprisingly.  Stay on the long, winding, unsealed Stormlea Rd.  At 2km there is a right fork to Stormlea, then at another 5km there is another sign to the right to Stormlea and Cape Raoul.  If coming from Nubeena, come along the Port Arthur road for 2.8km, turn right onto the road to Highcroft/Stormlea.