Our June walk was an overnighter, to Lake St Clair, thanks to Caroline for organising that!

Given the cold weather, Di looked for somewhere easterly and "un elevated" for this July outing, and remembered a walk that had been recommended by a friend - the clifftop trail from Roches Beach to Seven Mile Beach.  We decided to try approaching this from Lauderdale, making it a bit longer and with more beach walking.  So at 10.40am on a day that looked hopeful but with a chance of a shower, six of us (Bob, Lyn, Gerwyn, Wayne and Di) met at the carpark at the northern end of Lauderdale canal.


It was lovely and sunny as we headed north along the beach towards Roches Beach.  Although it was dead low tide, the beach still seemed fairly narrow. At the little point between these two beaches, a couple of houses were built very close to the point and the mini-headland was reinforced with dumploads of rocks. Here the water was just touching the rocks and we were able to scamper around on the sand. The point looks pretty vulnerable to the impacts of global warming, so it was surprising to see that another house is currently being built here.


Wayne seemed to know where he was going, which was useful!  We moved from the beach to the land just beyond the Roches Beach sailing club, although there is another access up some stairs further on (we used these on the way back).  This is the beginning of the clifftop trail marked on the map.  It is only about a metre wide and shared with MTBs.  We soon passed the turnoff to the left towards the Tangara Trail (I think the trail we were on is also part of the Tangara Trail). It has some nice features and is generally dry and sound.

There are lovely views along here over Frederick Henry Bay, back towards Cremorne and towards Seven Mile Beach.  We saw and heard planes lining up to land at the airport. The path seemed very popular with walkers, family groups, runners with dogs and MTBers.


After two hours walking, we descended onto Seven Mile Beach.  The sand was thick with washed up seaweed, shells and some amazing sponges.  We found a dune a little way along, with some old tree roots for perching on, and had our lunch.


After lunch several of us made a small circuit past the local shop to locate the loos in the park, then back to the beach, where we found Lyn and Bob waiting with hot coffees in hand!

The walk back seemed even more pleasant.  The showers had not materialised, the sky was clear and the day became generally splendid. 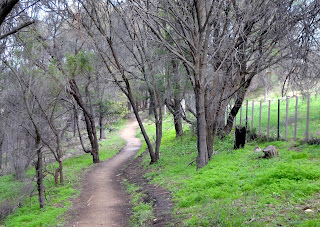 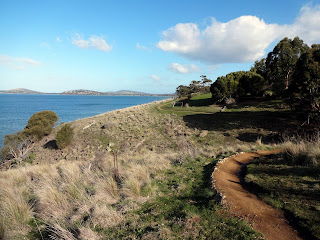 Lyn fielded a phonecall from Gary, who had arrived at Lauderdale with grandson Adam.  We found them later on the beach, both wet and having a great time.

At the Roches Beach headland, the tide had risen (of course) and now prevented us getting through on the sand, and the rocks were unfriendly.  Wayne scouted ahead taking the high side of the rocks.  Unfortunately we realised soon that we were actually on people's front yards, which was a bit awkward.  Partway around there was access to a local road where we could have taken the long way around, but we seemed committed and pushed through.  Council and the locals really need to provide a path through this point. 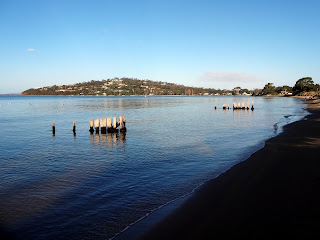 We got back to the carpark at 3.15pm.  Feeling the stiffness creeping on already (I blame the beach walking!), we retired gratefully for our post walk coffee to The Sand Bar on Ralphs Bay.  The coffees were good, thumbs down on the trendy mason jar glasses (although Lyn voted for them).

Thanks to Bob for the photos.