This Sunday, Bob organised a duo of short walks, with a beach picnic in the middle. What a good idea. First we did the Snug Falls walk.  Caroline, Robert, Julie, Wayne and I met Bob at the carpark for the Snug Falls at 10am.   It was a mild, overcast day, and the track was dry, so it was an easy walk down the hill, only 25 minutes. 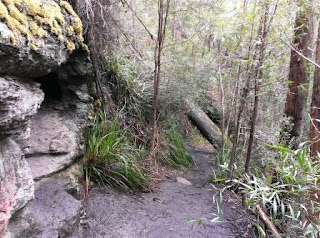 There were some lovely mini caves in the rocks, and hidey holes in tree trunks, which kids would love. 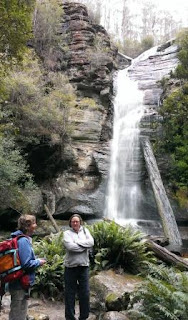 The falls were very nice. 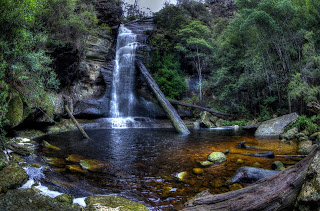 The rocks were quite slippery, and it was Robert who had a fall today, getting his feet wet in the freezing creek.  Bob and Wayne ran into a friend and enjoyed catching up (it must be Tasmania!).  But it was a bit cool in the shadowed valley, so we didn't stay very long.

The walk back up the hill was easy, and seemed actually shorter than the trip down, but it was the same time of 25 minutes.  Back in the cars, we headed to nearby Coningham Beach, where we spread our picnic contributions out to share.  Wayne and Caroline had both bought chicken and brie quiches(!), and we agreed that the one from the Bellerive Food Store was the better one.  Robert and Julie had both made muffins(!), although Robert's muffins were savoury and Julie's were deliciously sweet (coconut and lime). Bob discovered his inner gourmet, with dukkah, balsamic and fresh bread. 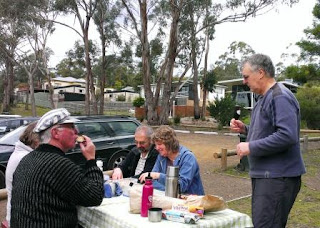 Feeling rested and refreshed, we set off from there along the beach, and were excited to see a sea eagle soaring above. 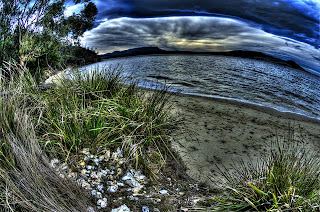 At the end of the beach, near the colourful boatsheds, steps led up to the cliffside path. 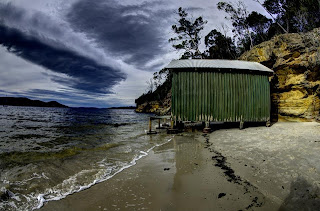 The cliff top walk was easy going, with great views now and then over the Derwent.  The first part has been renovated recently, and moved back from the edge.  There are seemingly endless warning signs.  Clearly if you disobey the signs and approach the cliff top, and have an accident, you are a complete idiot and no-one should bother trying to rescue you.  And it's not the Council or government's fault. 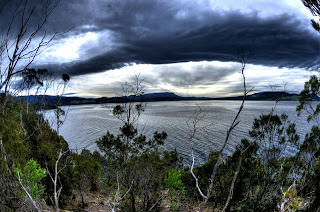 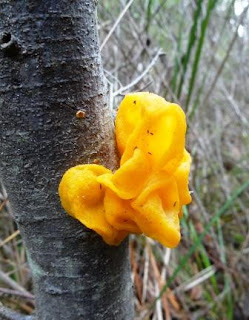 It's called "Yellow Brain" from the Tremella mesenterica group.  The colour deepens to orange as it ages and dies.

There are several cute interpretive signs, created by kids from the local school. 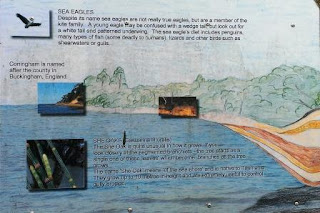 The track descends to a small beach, which looks most readily accessible by boat. 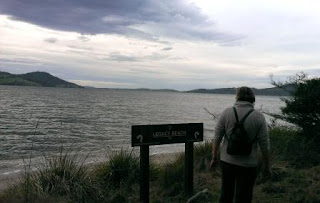 It then climbs up to the clifftop again, and meanders along to its end at a carpark, which we reached at 12.55pm.  Here we turned around and retraced our steps. 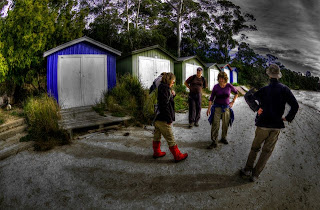 The clifftop walk was about 50 minutes each way, so our total walking time today was 2.5 hours.

Back at Coningham Beach, we decided we were all up for coffee and drove to Banjo's in Margate.  When we got there, Bob remembered that the recently opened Channel Heritage Centre had a cafe and suggested we try that instead.  Good idea, Bob, we said, and set off to walk there.  But Bob got back in his car and drove!

The cafe, it has to be said, is pretty basic and the coffee was lousy.  But it's clearly a valuable focus for locals who value their history.  The museum was full of memorabilia and there is a reading room and library stacked with newspaper clippings and albums.  And I picked up a new beanie for my hat collection, so I was happy. All in all, it was a lovely day out with friends, enjoying some straightforward and easy walks.