Robert and Di did this walk while enjoying a weekend escape on the East Coast with Wanda.

We thought we'd take a little look at the Apsley River end of the Douglas-Apsley National Park, having not been there before.  This is one of Tassie's Parks and Wildlife Service's Great Short Walks, so some details can be found here.  PWS suggest doing the walk over the hill and returning along the same path (2-3 hour return, 5.6km return).  We used the walk description in "Day Walks Tasmania" by John and Monica Chapman - they suggest doing the full loop  i.e. returning along the river bed.

Go 4.5km north of Bicheno, turn left onto Rosedale Road (well signposted), then enjoy 7.5km winding through pleasant farmlands (mostly unsealed), and find the roomy carpark.  After signing into the walkers' log there is an option of a short 5 min loop walk to the Lookout over the Apsley River - but NOTE the Lookout is currently closed off for repair.

It is a few minutes' walk down to the Apsley River, which is very pretty, and home to the Australian Grayling (they ask you not to wear sunscreen if you are going for a swim, as it is harmful to the fish).  Here you can swim, picnic, and rockhop across to the other side where the Apsley Gorge walk commences (and the longer Leeaberra Walk comes in from the north).

We set off northwestwards from the river at 11am, thinking of just doing a short walk as we hadn't packed a lunch or much in the way of gear. This is a comfortable uphill climb, with lots of nicely made stone steps where required.  We spotted a hooded orchid at the side of the path and later on met a chap taking lots of photos of orchids (he'd found a spider orchid).

There are no lookouts along the path,  which rises to a long ridge and passes through attractive typical East Coast dry forest.  The track was dry and conditions were perfect on this spring day.  Lots of spring flowers were out. 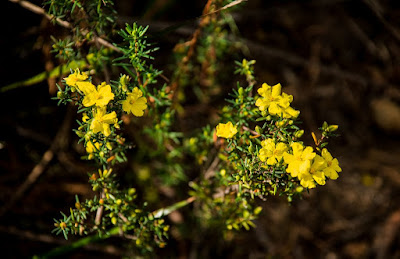 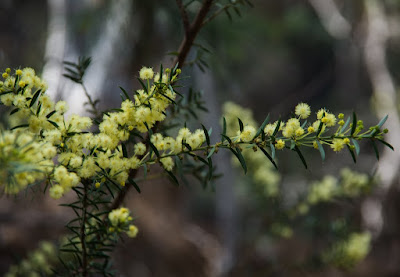 When we reached the end of the ridge, we made the snap decision to keep going and do the full loop walk.

There had been plenty of warnings about precautions for people choosing to walk back along the river, such as the Chapmans'  "The walk through the gorge requires scrambling over rocks and sturdy footwear is recommended.  There is no track through the gorge and it should not be attempted after heavy rainfall".   PWS had alarming signs posted showing people falling off rocks and a note that there is no mobile signal in the Gorge.  Duly warned, we decided to give it a go.  We were wearing sturdy shoes but not boots, which would have made it easier, but it was a beautiful day, so what the heck.

At about midday we reached the river upstream in the Gorge.  It is a beautiful spot. 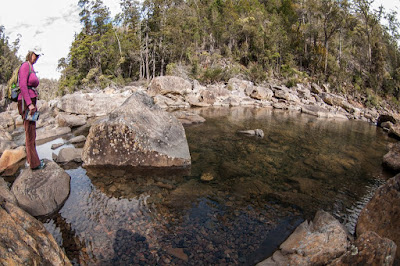 Once again, a great spot for picknicking and swimming, more pristine and a lot more private than at the beginning of the walk. 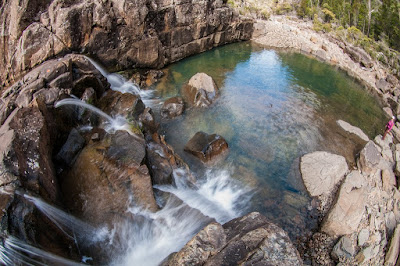 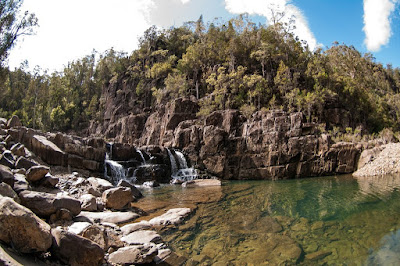 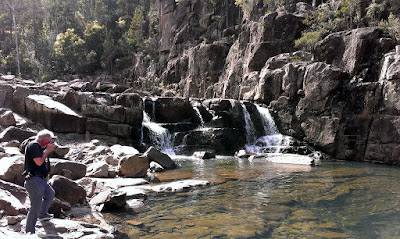 The Chapmans measured the loop as 6.1km.  My recording via Strava showed 8.4km to and from the carpark!  I believe Strava.

It took us about 3 hours to rockhop our way down the riverbed back to the walk's start, and it used every muscle in our bodies. There is no marked track, you have to continually judge the best (only?) way forward, having to cross the river again and again to make progress.  It was rugged, pristine and beautiful.   The rocks ranged from huge boulders to sheer cliff faces to stretches of river gravel, and occasionally some minor bushbashing was required to navigate our way without getting our feet wet (or worse). 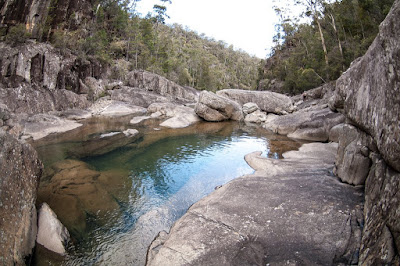 Slipping and falling could have been quite serious, and prospects of getting help in a hurry were pretty slim, so our minds were focussed!  Di had emergency muesli bars packed (Be Prepared!), so we were able to stop for a snack and let our legs recover a little.  It seemed to take forever (we had missed lunch, after all) to rockhop down the many bends, admiring the spouting waterfalls and clear but cold pools.

At about 3pm we made it back to the beginning, exhausted but smug. So the total walk time was 4 hours.  Notes for next time:  do take lunch and have a good picnic on the beautiful river rocks; be well prepared with rockhopping footwear and contingencies for accidents (such as a Personal Location Beacon PLB);  and make sure the river is not high.

There were 6 of us:  Kat, Philip, Tony, Lyn, George and Bob.  Chauncy Vale is about a 40 minute drive north of Hobart so we pooled into two cars and set off on the walk about 10:30am.
There had been some recent rain and the weather prediction was for light showers so we all prepared for a possible wet walk, but fortunately the weather held and while it was mostly cloudy, we had some sunny breaks.  The main path to Flat Rock crosses a creek three times and because of the recent rain we decided to the detour to The Caves first as we could access that without crossing the creek.
The Caves were fascinating and it was easy to see how they inspired Nan Chauncy’s books.  It was uphill to The Caves for about 30 minutes, then along a ridge where the caves were.

Then back down to the creek where we caught up with the track to Flat Rock.  The track was well defined and the detour took about 90 minutes with stops for pictures. 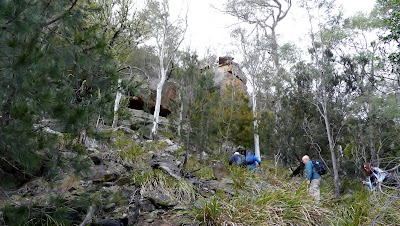 We needed to cross the creek when we rejoined the Flat Rock track but the creek was low so the crossing was easy.  We decided that on the way back we would take the shorter path to the carpark. 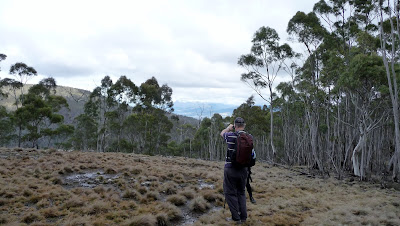 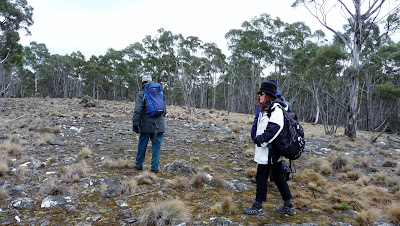 The track to the Flat Rock was wide, mostly dry and at a constant but easy upward grade.  The bushland was interesting and not what I expected, it seemed to me to be more like the Victorian Highlands than Tassie bush.  We reached the T junction for walks to the eastern and western lookouts at about 1:00 which means we had been walking for about 2½ hours.  We decided to see the eastern lookout first which took about another 30 minutes and we had lunch there.  The view was over the mountain tops which is always pleasant, but it wasn’t what I would call magnificent.


On the way back down we took the 5 minute walk to the western lookout which had a unique view of the snow clad Mt Wellington.
The walk back down took about 2 hours.  We probably could have been quicker but the constant downhill was a strain of my knees and I fear I held the others back.
Walking back alongside the creek to the carpark we saw Eve’s Bath – a bath shaped rock formation in the creek - which features in one of Nan Chauncy’s books. Tks to Bob for organising this walk and for telling the tale.
Posted by Di E No comments: