This walk was organised by Bob and was a valiant attempt to capitalise on the Queens Birthday long weekend to venture a bit further afield than usual - we took on Cradle Mountain.  As it was a bit of a drive to get there from Hobart, we shared cars and travelled up on Saturday afternoon, planning to stay two nights up there and get in some good walks.

Bob, Jules, Kat, Philip, James, Leanne, Wayne, Gerwon, Caroline and Warren stayed at the Waldheim Chalets.  These are now very comfortable, with all mod cons, and you can drive all the way in. Di and Robert travelled up separately in Wanda (because Di wanted to attend a community event in Hobart, and we wanted to take Wanda for a spin!).

Unfortunately, the weather was horrific, with heavy low-lying cloud, rain squalls and bitter cold wind sweeping over the mountain all weekend.  Early on Sunday morning, groups from the Chalets walked around Dove Lake.  Wayne and Gerwon almost made it to Wombat Pool but were beaten back by the conditions. 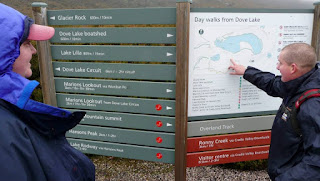 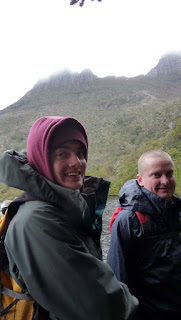 When Di and Robert arrived on Sunday morning from an overnight camp at Lake Barrington East, we found the Visitor Centre carpark busier than we had expected and a decent queue waiting for the shuttle bus to Dove Lake.  Given the bitter conditions, it wasn't much fun to hear that there was a 20 minute wait between buses.  Later we heard that staff had been surprised by 5 times as many visitors on that holiday Sunday than there had been just the day before.  Extra buses were to be put on, which sounded good.

Despite claims by Parks and Wildlife, phone communications were pretty patchy - text messages could take a long time to arrive.  Later I tried Messenger, but that was no more reliable.  Photos took a long time to upload.

When we reached the shelter at Dove Lake, we ran into the first mob returning from their Dove Lake circuit.  Warm invitations were extended to come up to the Chalets for coffee, wine and good cheer.

Robert and I thoroughly enjoyed the easy walk around Dove Lake.  Well, we were well rugged up and with good wet weather gear! 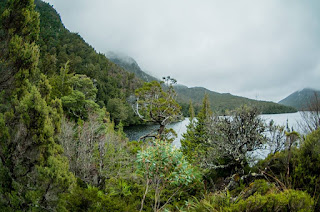 Most of the path was in excellent condition, with safe duckboarding and artful corners and steps. 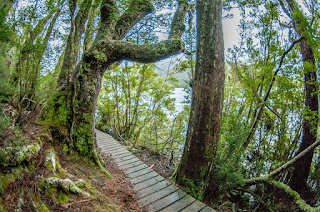 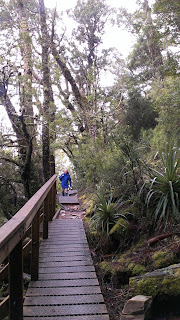 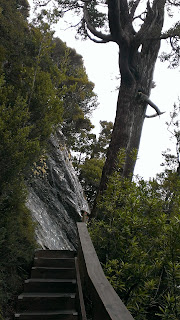 Stopping for our mandatory gourmet snack at the southern end of the lake, we were delighted to be joined by a self-assured wombat, who strolled up the duckboards and snuffled around the picnic platform for quite some time.  He/she was thoroughly enjoying the native grasses and quite oblivious to the excitement created amongst the strange two-legged animals.


Finishing this circuit, and with the weather not showing any signs of improving, Robert and I decided to cut our losses and leave the park, head north to Devonport for dinner and find a more peaceful campsite for the night.

We became part of a small melee of walkers trying to self organise an orderly queue inside the Dove Lake shelter.  Rangers came in to replace the sliding door which had been taken away(!) during the day for repair to the runners - I'm sure they were thinking this was not the best day for this job to be needed.   I spotted a ranger checking the registration book, possibly to see if there was anyone well overdue from their walk.  Thankfully the extra bus was finally put on before tolerance limits were severely tested, and we made it back to the Visitor Centre.


The weather continued to be shocking on Monday, and the main group of walkers also decided to call it quits on Monday morning, checking out of the park without tackling any more walks.

Despite the challenging conditions, it was a memorable experience, and it was great to see the park still beautiful and pristine while managing very large numbers of visitors.