Bob organised this month's excursion to Mt Hartz.  Di, Robert, Angie, Lyn, Gerwyn, Wayne and Bob were available on the day, and we set off from the city at 9am, aiming to be at the Mt Hartz carpark by 10.30am.  The day was clear and warm in the city, and we were hopeful of the weather clearing in the afternoon.  As we drove carefully up the gravel approach road from the Tahune road, we were excited to see a lyrebird skipping across the road just in front of us - how lovely!

But we were watching the thermometer which showed the outside temperature dropping steadily. Getting out of the warm car was a rude shock - there was a touch of panic as we reviewed what warm clothes we had brought with us.  Hell's bells, it's meant to be summer!   But we are a sufficiently experienced bunch that we'd managed to bring enough layers despite not quite forseeing how cold it would be.  We set off from the hut at 10.40am looking forward to a beaut (if nippy) day on the track.


Boot cleaning stations are quite common now, but even so, Bob (today's process observer) noted that only one of the seven of us managed to follow the instructions and clean their boots properly! 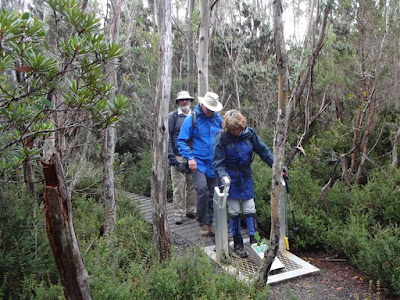 The track was pretty damp and the mountain streams were running strongly, but it was a nice clear day. 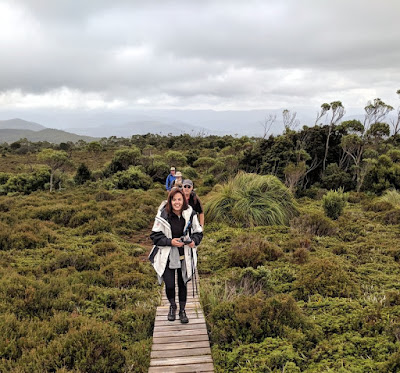 We had a quick snack at Lake Esperance (well, wasn't it morning tea time already?). 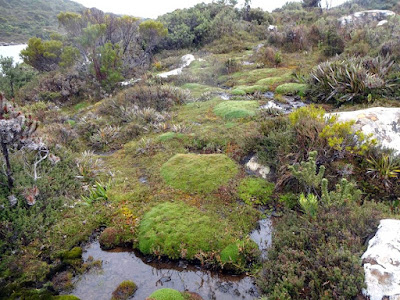 We noticed that the clouds above were being blown towards us by southwesterly winds, and were visibly dropping down onto us from the ridge ahead.  Occasionally the cloud dampness became a light shower.   We kept moving, took a quick look at Ladies Tarn, and climbed the steep path to the ridgeline. 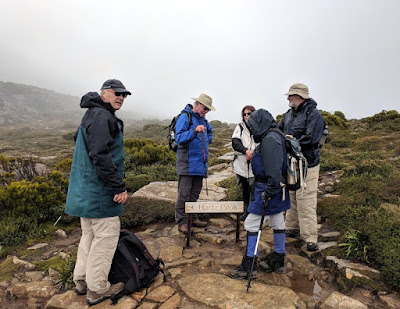 Arriving at the top of the ridge we could now see that the top of Mt Hartz was obscured by thick cloud, so there would be no views to be had up there.  We decided to go sideways, to visit Hartz Lake instead, hoping that the clouds might stay above our heads.  However, after following the cairn-marked trail for a few hundred metres, it became clear that the clouds were descending and getting thicker, and that we wouldn't be seeing much of the Lake either.  So we turned back with some reluctance.  What a shame.

The track was quite busy, with regular groups of walkers joining and passing us.  Many were tourists, mostly Europeans, happy to chat about their travels and to pick our brains about today's route and other walks. 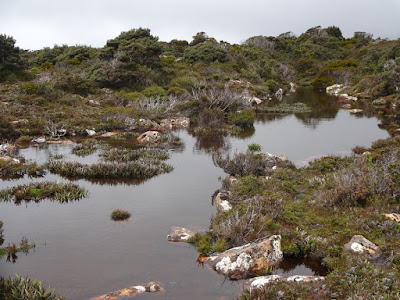 Back at Lake Esperance we stopped to enjoy our picnic lunches on the handy timber benches.  What a lovely little spot. 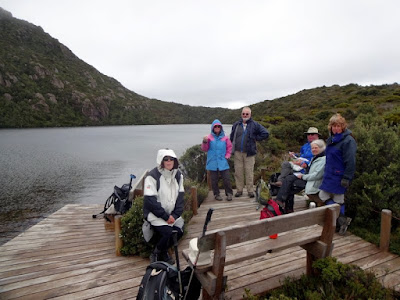 But the cold was starting to seep into our bones, so we didn't stay long. We made our way back along the path to the Hartz Shelter, arriving at 2.10pm.  Here we had another little stop for a cup of tea from the thermos, and a friendly tourist told us about Frank's Cider Barn in Franklin (hey, they have great cider, scones and frangipani tarts!).

So of course our next stop was Frank's, which turned out to be an old weatherboard community hall, repurposed as a popular cafe and ciderhouse.  The devonshire tea was well appreciated, the coffee was good and the ciders pronounced good enough.  Sadly the frangipani tart had been sold out.  It was a convivial end for our very enjoyable day out in the beautiful south west.
Posted by Di E No comments: