This was a return visit for some of us - we did this walk in March 2010, on a hot sunny day - and a first for others.  Given the timing of this walk, just after Anzac Day, we were expecting to be able to see the 'fagus in its autumn colours on Lake Dobson Road.  Our thoughts were also with our friends who were expressing their support for the rainforest just around the back of Mt Field in the Florentine.

Di, Robert, Caroline, Bob and Lyn met at Wayne's place at 8am to pile into two cars for the trip.  It was a cold morning, the first real cold snap of winter had swept over southern Tasmania the previous day, but the outlook was for a fine day.  It wasn't until we got to the Mt Field Visitors' Centre an hour later that we realised the weather would be grimmer than it had appeared in town.  There was a hint of rain and it was definitely cooler already. 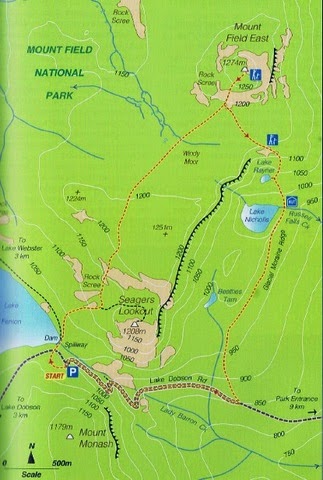 As we climbed Lake Dobson Road, the outdoor temperature steadily dropped, till it reached 6 degrees.  We saw our first snow of the season, it was enchanting.  But surprisingly, the 'fagus on the bend in the road had not started to turn!  We did a clever car shuffle, leaving one car in the lower carpark, so that we could avoid a dreary 2km at the end of the walk, climbing up the road to the top carpark. In the top carpark, which was covered in pristine snow when we arrived, we pulled on as many layers as we had. Those without thermals, gaiters and raincoats were wishing they'd had more time to prepare. 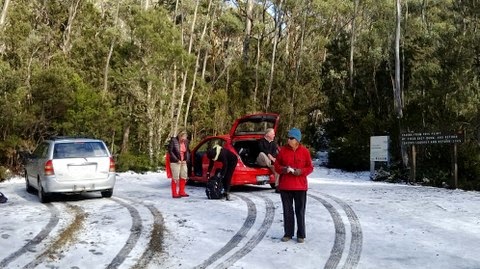 At about 10.15am we set off into the pretty first section of the path, through pure snow, enjoying the thought that only native wildlife (wallaby?) had been on the path before us today. 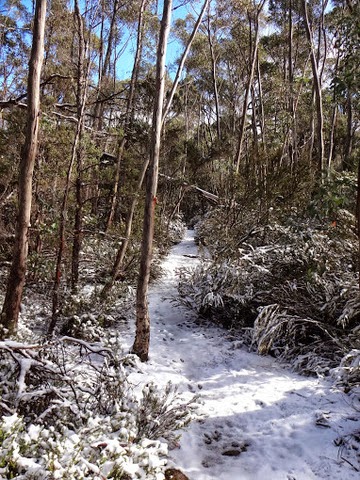 We crossed Lake Dobson Rd and walked into the (closed) Lake Fenton carpark.  There was a track entering the carpark on the right which had us confused.  But we continued straight ahead under the base of the dam and were soon rewarded with a proper sign pointing to our track. The snow was a couple of inches thick and the snowmelt was running down the track, meaning a lot of hopping from rock to solid ground to root, and the occasional splosh when we missed. 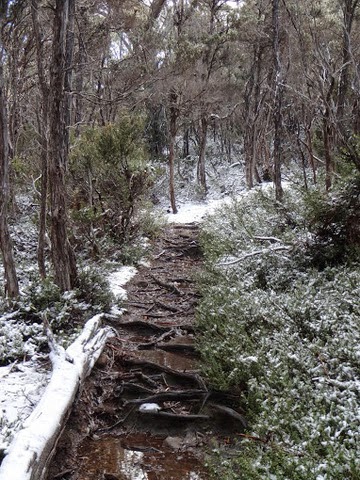 In the areas of rocky scree, the snow covered not only the rocks but also the gaps around them, so the walker at the front had to work harder to spot where the track was and was pretty tentative with placing the first footprints of the day (except for the wombats!). 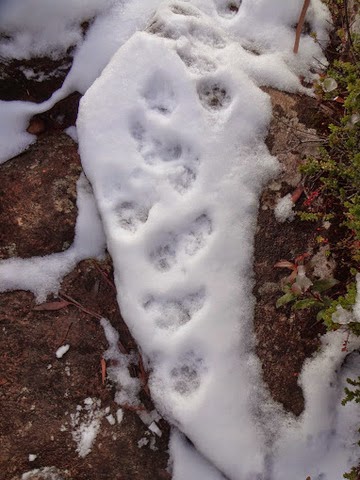 So our rate of progress was fairly slow. 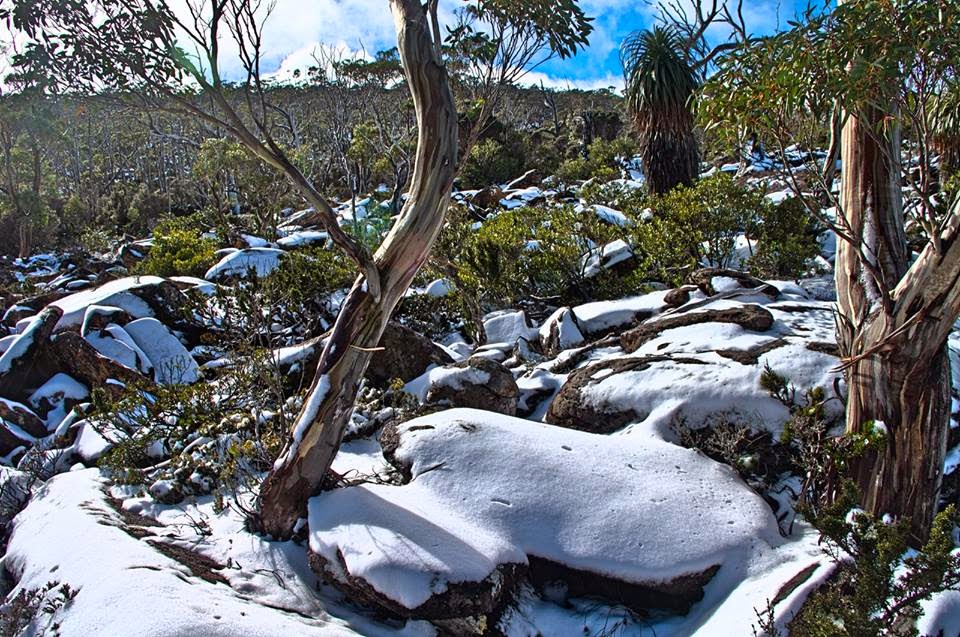 But we were surrounded by beauty.

When we got to the turnoff to Seager's Lookout we thought we would give that a miss today, given the conditions.  We continued on, with the track mostly uphill.  It was an impressive view back over Lake Fenton and towards the Tarn Shelf, with lots of chilly clouds coming our way.

On Windy Moor, the melting snow meant the track was mostly a creek, with large sections of ice.   We were forced to take wide detours just to avoid walking through knee depth icy pools.  This is Di missing her footing! 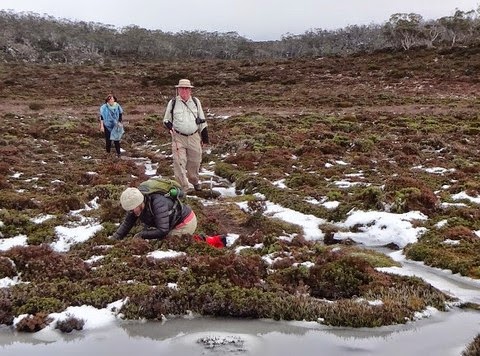 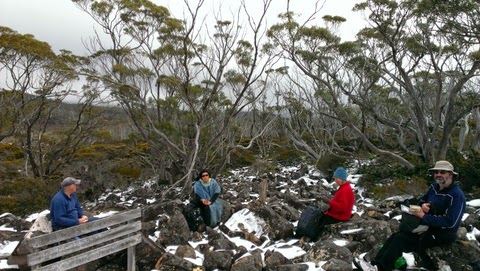 Then we headed downhill towards Lake Nichols. Unfortunately this involved a lot of scree, which was difficult to manage in the snow. 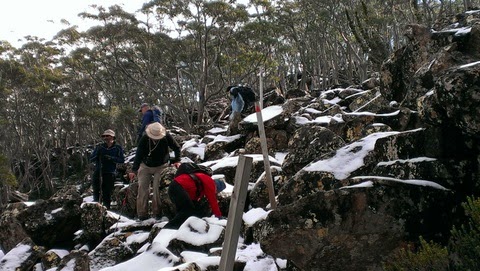 But there were some lovely fungi in the woodland parts of this track. 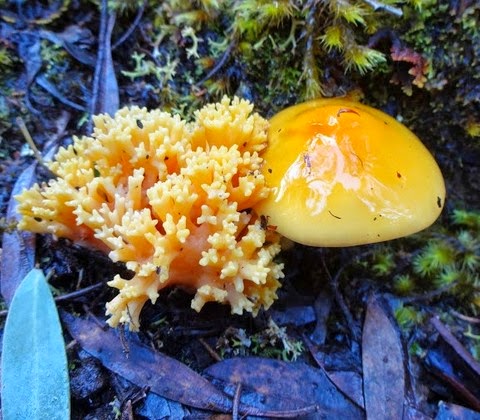 It was nice to reach Lake Nichols and take a short break. 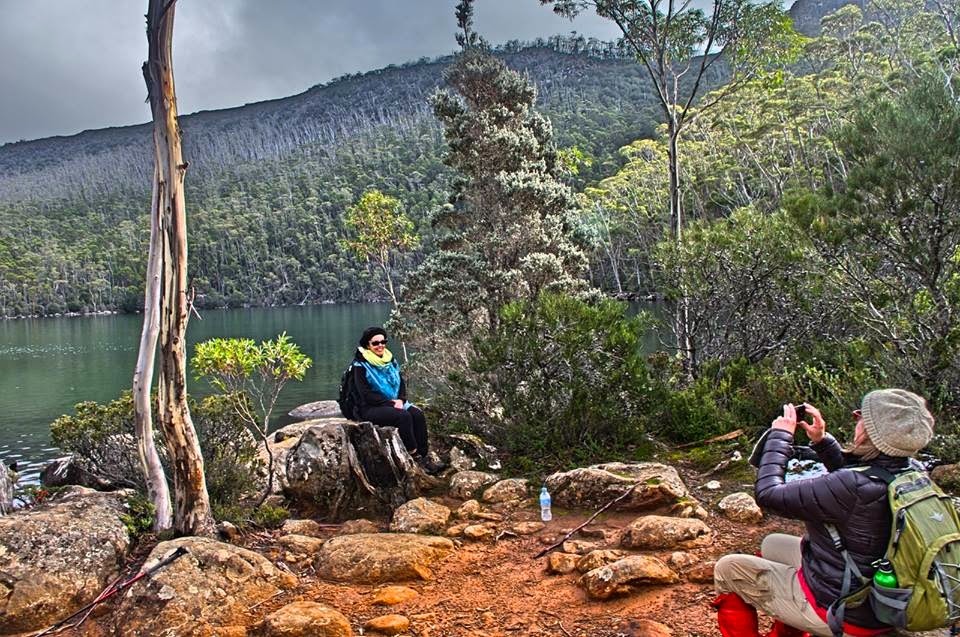 We reached the lower carpark at 3pm, so we had been walking for 4h 45mins, which was quite enough for us.  It had been a terrific day though, with fantastic views and a pristine wilderness experience.

After bringing the top car down again, we drove slowly down the mountain and stopped for a reviving coffee/chai/tea in the Possum Shed cafe in Westerway. The cafe was bulging with likeminded people who'd been at the Rally for the Florentine - they'd all had a good day too.