Bob had organised ten of us for this walk - me, Robert, Bob, Wayne, Angie, Pauline, Austin, Sophie, Catherine and Peter - and we gathered at our place at 9am on what looked like a perfect autumn day to consider how far we would walk and whether this would affect car sharing decisions.  Looking at the map, we all thought we could make it to Newdegate Hut (5.7km) for lunch and, returning on the same track, get back in a reasonable time.   The full loop circuit including Lake Webster, about 13km, reported at 7 hours for walkers of our vintage, sounded rather too much for all of us. 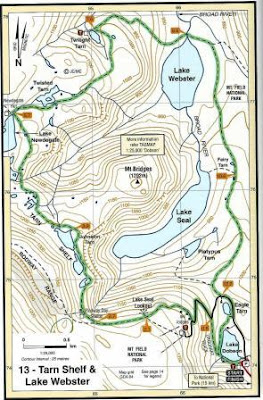 So we piled into three cars and headed off at about 9.20am, reaching the Lake Dobson carpark at about 10.45am. It's an hour's drive to Mt Field NP, then another 20 mins or so to get up to Lake Dobson.

We were hoping to see the 'fagus "turning", as the traditional day to visit Mt Field to witness this is Anzac Day (April 25), but the 'fagus groves on the road up to Lake Dobson were showing no signs of turning as yet.  There had been reports of snow falling on Mt Field during the week, so we were unsure how much snow would be up there. Personally, I was hoping there would not be too much! Most of us were wearing our thermal long johns for the first time this year, in anticipation of the cold mountain shelf.  After squeezing into our boots, gaiters and fleecy jackets, we set off in great spirits a little before 11am.  Lake Dobson was looking perfect and the track was in great shape.

We took the Urqhart Track up to the left from the Lake Dobson circuit track, and headed up the hill towards the ski fields and Mawson Plateau.  We passed through a pretty pandani (Richea pandanifolia) grove and then struck up a dirt road leading to the ski lodges. 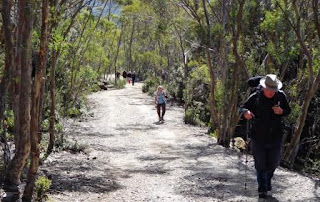 We passed the two lodges and took the fairly level and straight duckboard track westwards across the ski field towards the Lake Seal Lookout.  This section was very easy walking and a great start to the day.
The Lake Seal Lookout gave great views over Mt Bridges and towards the area we were about to traverse. Ken Collins says that the landforms here are resistant peaks of Jurassic dolerite, rolling ice-smoothed (glacial) terrain, and rock - shattered by frost during the last ice age in the Pleistocene - now seen as boulderfields. "Some of the intrusive dolerite cooled slowly and formed vertical columns such as Mt Field West. Erosion by frost and ice has created flat bouldery plateaus above the cliffs, glaciers have cut deep into valleys, and the process of solifluction (the mass movement of rock debris in saturated soil) has covered the lower slopes of the range with boulders. These erosive processes have formed tabular landforms".
The Broad Valley contained a large glacier that eroded a typical U profile.  As well, it deposited moraines along the valley, and eroded a valley step (a cliff or steep slope) between Lake Webster and Lake Seal.  Rock basins carved by a glacier on the Tarn Shelf are now filled by Lake Newdegate and tarns.
The track from the Lake Seal Lookout to the Rodway Day Shelter was mostly on duckboards, over a slight incline, and we came across occasional tiny patches of snow. The alpine vegetation, the pristine air and the stunning views.....it was a joy to be alive and on the Tarn Shelf.

After the Rodway Shelter, the track was mostly rock-hopping over the dolerite. 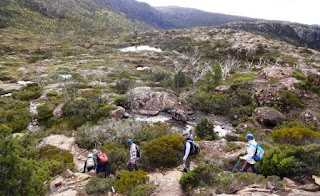 We passed a series of beautiful little tarns and saw some lovely groves of 'fagus definitely starting to "turn" into their autumn colours - fantastic! 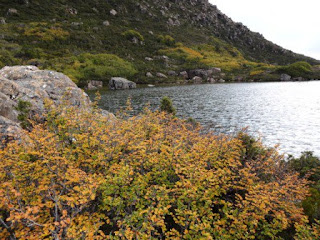 A little after Johnston Tarn we had a short snack stop, then headed onwards.  The continual rock-hopping was starting to get a bit tiring for most of us. 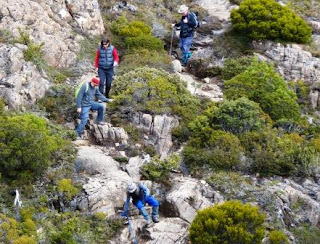 By the time we reached Backhouse Tarn, it was 1.30pm and we had been walking for 2.5 hours.  Most of us were well and truly ready for lunch and to then head back along the track. We wanted to make sure we were close to Lake Dobson before the evening closed in.  So we enjoyed our packed lunches alongside this lovely tarn.  The weather was still holding up well, with patches of sunshine dancing across the mountainside, and no rain as yet.  A few emerging blisters were addressed! 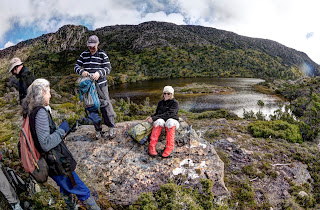 Bob was determined to achieve our original goal, and decided to press on to Newdegate Hut with Wayne and Peter, with the aim of catching up with us slowpokes on the way back

They caught us much sooner than we expected, rejoining the larger group as we reached the Rodway Shelter.  We were amazed at their energy, as the rest of us were starting to suffer a little by then.

We made speed across the Shelf, along the duckboards.  At the Lake Seal Lookout intersection, we took the left hand track down towards Lake Dobson. This turned out to be mostly rock-hopping, with more good views over Lake Seal and the Broad River valley.   There were some magnificent snow gums, massively twisted by the weather.  This track came out at  the ski lodges and we trundled back down the dirt road, which now seemed very steep.  Another look at the pandani grove, and we were back at charming Lake Dobson at about 4.30pm.

We'd been on the track for five and a half hours, including a half hour lunch stop, and the amount of rock hopping had been a challenge.  Massively pleased with ourselves at our great feat, we fell into our cars and set off home, tired but satisfied.   A possible coffee stop fell through when we found the Possum Shed closed (well, it was after 5pm).  What a shame.

Someone mentioned that platypi can often be observed in Platypus Tarn (near Lake Dobson), so that might be a nice short walk for the future.