Apart from a miscalculation about the time this walk would take, it was a lovely day on the Mountain for us - Di, Robert and George.  About the time: TasTrails had this walk pegged at 2 hours, when we got to the start of the track the sign suggested 1hr 30 mins each way, and we actually took 3 hrs 40 mins (including a 15 minute stop at the monument).  Hmmm.  I think we need to be more careful these days about estimating how long walks will take us (or get a lot fitter!).

The top of Mount Wellington was a little cool at 10am when we set off, but the clouds burnt off and we warmed up as we walked, so we were quickly removing layers.  Soon we were bathed in sunshine.

The turnoff to Smith's Monument walk was only a short way along, and would be easy to miss - luckily a helpful person has scratched a directional arrow onto the sign to make it clear that this is where we turn off! 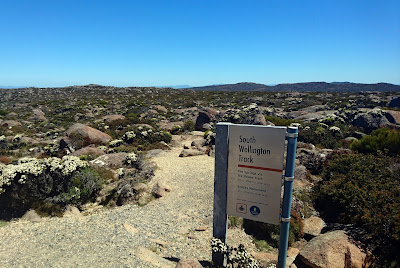 Sooner than expected (i.e. immediately) the track becomes rough and rocky, marked by snow poles. Stiff-soled boots are a prerequisite for rockhopping all along this track, also gaiters as the low growing scrub is prickly!  We were all glad we had walking poles too.

There were many flowers out, which was lovely, and the dolerite columns were spectacular.


And check out that interesting outcrop on the right, as seen by Mark Clemens in about 1985:

The views over the Derwent and into the west were terrific.


Skinks were lazing on rocks all over the place, even on the path!


It was actually a bit muddy in parts, as both George and Robert discovered at the cost of a wet foot each!   Many of the little pools were busy with tadpoles.

The trail dropped down from the top plateau into a rocky field. 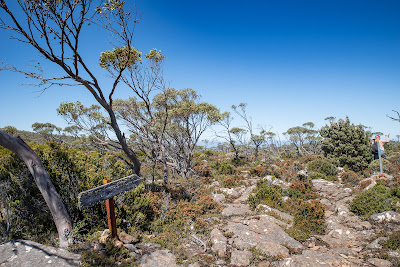 The track now passes through a sketchy cover of windblown E. coccifera, and the rocks get larger.  Thankfully the snow poles continue here, as it would be difficult to find the rock cairns alone amongst the bushes. 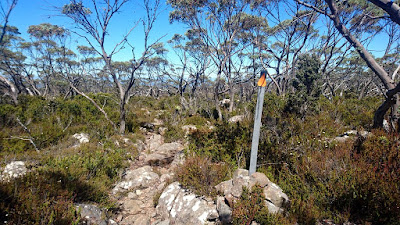 It is a bit odd to come across this shrouded object in the middle of nowhere:


until you realise that this is it! 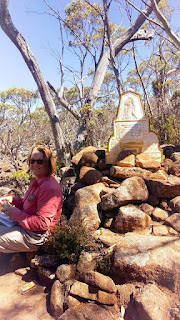 We had a short snack break - the march flies were a bit annoying - and set off on the return trek towards the Pinnacle.  This was mostly uphill but not too difficult.

We were impressed with how many other walkers were on the tracks, and the Pinnacle was crowded with both locals and tourists - taking photos from the summit, enjoying the views, walking, and riding.  The Mountain is a wonderful natural asset for all of us, we must keep it safe.