Three of us, Robert, me and my old school friend Penny, set off from Hobart at 8am to catch the 9.30am ferry from Triabunna.  We were aiming to go up Bishop and Clerk, have a good look around Darlington and, with luck, fit in a quick walk towards the Painted Cliffs before catching the last ferry of the day back, at 4.30pm. It was a lovely early summer day, hot but not blistering, breezy but not too blustery, just right!

Trip planning:  The drive up is about 75 minutes for locals, but would be 90 minutes for visitors not familiar with the roads.  The summer timetable started on 1 December, it allows more trips per day, and more hours on the island for daytrippers.  The fare is $35 per adult, plus GST.  Book tickets by phone, using credit card for payment.

John and Anne, the ferry operators, were very friendly and chatty, quite willing to answer piles of questions from visitors.  An ark population of Tassie devils has recently been deposited on Maria, and one of our fellow passengers was a tracker, going over to locate where they have dispersed to, courtesy of their radio collars.  Filmmakers were making a documentary of scientific work on Maria while we were there, and captured us getting on and off the ferry, so we might be stars soon! 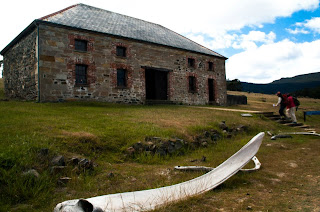 We registered at the Commissariat and ambled around Cape Boullanger, checking out the cemetery and the Miller's cottage, past the old limestone quarry, then the Fossil Cliffs.  En route we saw Cape Barren Geese, Welcome Swallows and Tree Martins. After the Fossil Cliffs you can turn off to the right to return to Darlington, we headed on up Skipping Ridge, above the high and rugged sandstone cliffs.  You would want to hold on to children here, and not do this walk on a very windy day! 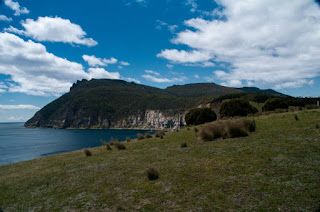 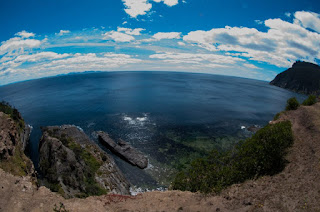 The walk along Skipping Ridge, through the sheoaks, stringybarks and viminalis forest, is lovely, a long  steady gentle climb. Bikes can be ridden along this wide, even track.  You can hire them from the ferry operators or take your own over. We saw more birds, including Green Rosella, Swift Parrot, New Holland Honeyeater, Australian Magpie, Forest Raven, and heard Yellow Wattlebird and Kookaburra. 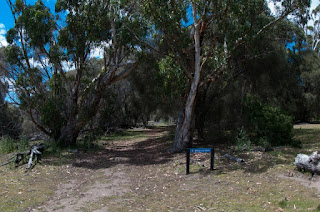 We were peeling our eyes and ears for the Forty Spotted Pardalote, but couldn't identify it amongst the many birdsongs, despite Robert's Birds of Tasmania app.  It would be great to settle down in a clearing here and just focus on the birds for a while.  A sign appeared, indicating that bikes should go no further, and here a steeper section began, going alternately upwards and level again.

Then we reached the scree slope - this is an extensive and quite steep moraine, fortunately with a well made zig zag track of smaller stones and solid steps at the corners to make the going a bit easier.  Note - a very sensible idea would be to leave your pack at the bottom of the scree and just take water with you from here. This scree section was hard work - I was stopping at each zig to catch my breath, and so made very slow going.  We didn't realise till later that this section is actually right up amongst the dolerite columns, within the Bishop's hat.  The views were already amazing.

The track notes talk about a small sheltered area near the top to take a break - we had trouble finding this spot.  But at 2pm we collapsed just under the very top on some very large rocks, and had our lunch. 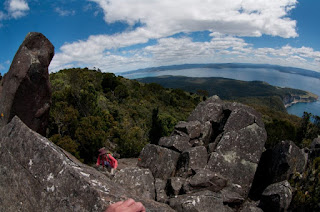 The view was awe-inspiring, and it was hard to believe how far we had come.  We were 620m high and had walked up from sea level in 3.5 hours. 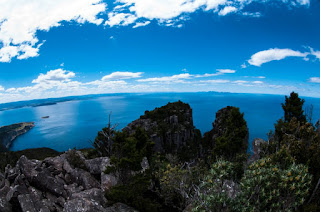 Robert and I were too buggered, and Penny was too short, to scramble up the final huge dolerite boulders to the ultimate top for the 360 degree view that the walkers we had met on the track had raved about.  And we were now a bit worried about making it back for the 4.30pm ferry. So we walked as fast as we safely could back down the rocks.  Penny caught a lump in the track with her foot and wrenched her knee, but fortunately could keep going.  It was a fast march down the long slope and by the time we reached Darlington there was no time even to have a quick look around.  Still less to fill our water bottles from the tank behind the Penitentiary (the only safe source of water in the vicinity apparently).  We did see some Native Hens and Forester Kangaroo.

We screeched to a halt at the Commissariat at 4.15pm, on time for the ferry (phew!).  Then we were frustrated to find that the ferry was late to arrive, and even later leaving, due to more filming of scientists and having to load up the many bags of the weekenders going home!!!!

Our urgent first stop back in Triabunna was at the supermarket to buy some much needed water, which we drank as fast as we could.  Note - take at least 2 bottles each next time!  But it was a fantastic achievement and we were so pleased to have seen the incredible views from the top of Bishop and Clerk.