Our official walk for February transmogrified into a bike ride to MONA (Angie, Robert and Di) to enjoy some music and the market, and then a performance of Music for a Warming Planet at Moonah Arts Centre (Angie, Robert, Di and George).  So as a substitute, here is a description of a walk by Di and Robert to Ralphs Falls earlier in that month.

Ralphs Falls is one of Tassie's Great Short Walks and is also well described in Thomas and Close's excellent 100 Walks in Tasmania.  It is accessible by gravel road either from Ringarooma or from Pyengana.

We fortified with coffee and stocked up on cheese at Pyengana, where we also got reassurance from a couple of locals that the gravel road would be navigable by Wanda. Coming from this direction, the turnoff is to the right at the foot of the road up to St Columba Falls.

Our first discovery was this sturdy old wooden bridge, over the beautifully clear New River, with a potential cosy campsite nearby. 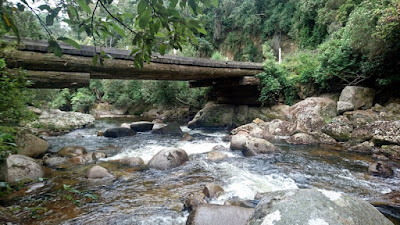 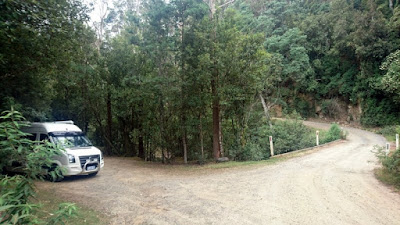 The gravel road is minor (one vehicle wide only) but in reasonable condition.  Drivers seemed to be pretty careful and courteous, which was nice.

Mount Victoria Road is used by the logging industry, but there was no logging on the day we went through.  There are lots of logging access roads, large and small.  We first got confused on the brow of a hill where a tree sported a hand painted sign to Ralphs Falls (great) but you couldn't tell which road it was referring to (not great).  We followed our noses to the right and then a little further on we ignored another tempting possibility to the right. Thankfully this turned out OK.

The carpark for Ralphs Falls is large and very well set up, with a toilet block, covered picnic tables and barbecue. 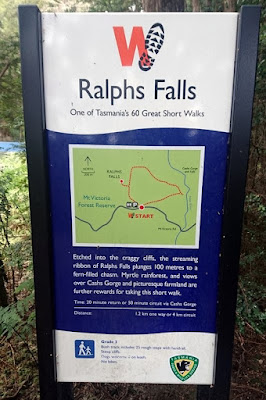 We set off at 1.20pm, walking the loop as described in the map above, clockwise, straight into a pretty, dense nothofagus forest.  We took the short diversion to the left to the lookout, and found out that it gives views over the sleepy valley and back to the lovely Ralphs Falls.  In fact this is the only way to (safely) see the Falls.  Sadly, vandals have destroyed the binocular telescope which had been thoughtfully provided by the locals! 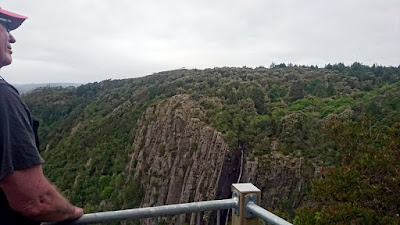 Ralphs Falls is a sinuous thread of water falling 100 metres along a curving slash in the dolerite. 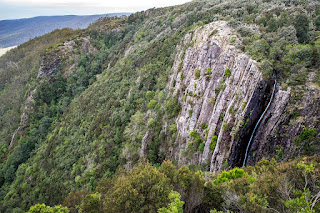 There are no signs inviting you to walk the full loop.  My theory is that this is because there is no fencing when you get to the vertiginous cliffs above the falls, and National Parks are worried about public liability claims.  What a shame that things have come to this.  Anyhow the walk is easy, attractive and interesting, from a sheltering tea tree forest to a duckboarded section over montane buttongrass plain.  With stops for photos, and another short diversion to look at Cash's Gorge, we got back to the carpark at 2.40pm.

We trundled on towards Ringarooma, mostly downhill at this stage, stopping to admire the old hand made drystone retaining walls constructed in the 1920's and still reliably holding up the road.  It was time for a picnic lunch in fact! 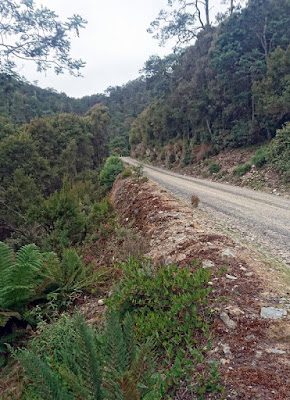 Meander Falls is one of the highest falls that tumble down from the Great Western Tiers.  It is also one of Tassie's 60 Great Short Walks, and it was time for us to check it out.   National Parks describe it as  "A full day’s walk that gets you away from the more popular areas and into the Tasmanian Wilderness World Heritage Area".  They rate it as 4.5 - 6 hours return, and Grade 3.

As it is about a three hour drive from Hobart to Meander, we decided an overnight stay was in order.  Di and Robert opted to take Wanda for a cosy home away from home, and George decided to visit Deloraine, staying at the Deloraine Hotel.  He reported that the rooms were comfortable, the bathrooms recently renovated, and it was a bargain price. 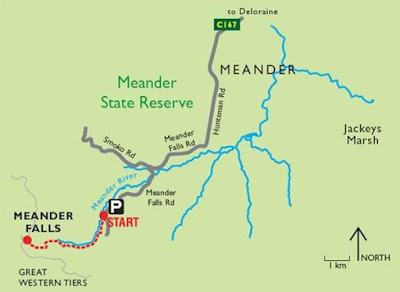 Getting there: finding Meander village is pretty straightforward.  However there is no signage as you leave the Meander village centre, so here are some important notes:  wave at the nice old lady standing on her verandah (we did, twice);  when the sealed road runs out, keep going straight ahead (don't turn left towards the dam);  after the Huntsman's Lake picnic ground, follow your nose and veer right on the new unsealed but smooth road.  Once you're in the pretty myrtle forest, there is bright new signage to go with the new roads and the two new bridges.  There were massive floods here several years ago, and the two old bridges and the old picnic area were washed away.  The new infrastructure is very impressive. The old picnic area has not been rebuilt but it was still a good spot for a self contained motorhome to camp.

We had arranged to meet at the Meander Falls carpark at 8.30am. George was early and (ahem) Di and Robert were late!  There was no mobile phone coverage up in that area, so it was lucky that our paths crossed as George was driving away thinking about a game of golf instead. We hit the trail at 9.15am.

Our first impressions of the trail were fabulous, it was lovely temperate rainforest, with myrtles, sassafras, leatherwoods, mountain pepper, ferns, even King Billy pines.  It had rained a little the day before so the trees happily dropped their morning dew onto us. 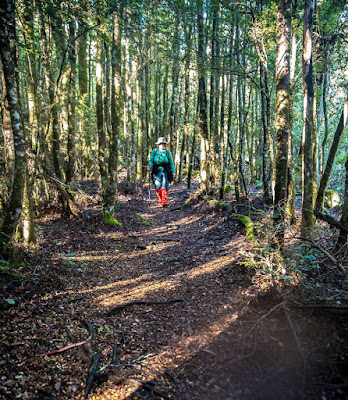 The track was damp and the rocks and roots a bit slippery, but conditions were pretty good as befitting the time of the year. The trail was simple, with little obvious grooming and only occasional additions of steps or bridges, but seemed well looked after.  There were a few diversions around treefalls, so the leader had to be sharp at wayfinding and spotting the next triangle pointer or surveyor's tape amongst the trees. 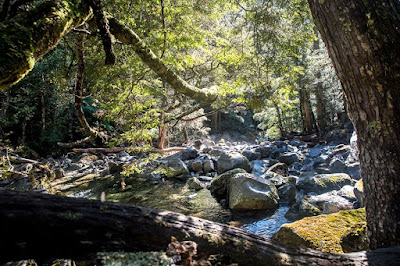 It was quite Tolkienesque - we half expected to see hobbits and wizards stepping along in front of us over the the leaf littered rocks and tangled tree roots. 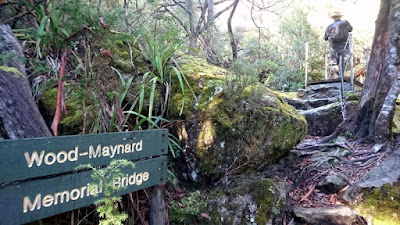 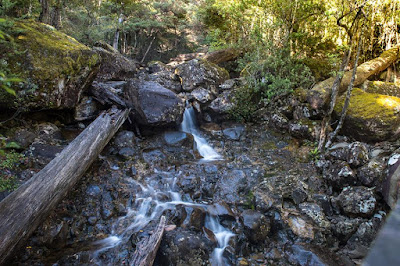 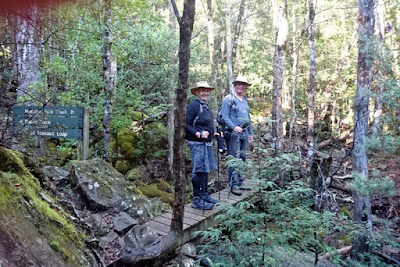 We discovered that the path to the Falls is all uphill, with the gradients fairly gentle for the first third of the way, then getting steeper...


A snack break at the two hour mark was a good idea.  A pool here, at the base of the Falls, would be a good spot for a swim on a hot summer's day. 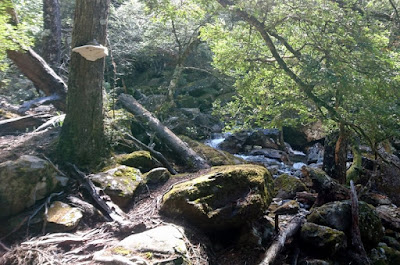 The last third of the trail seemed to lead us away from the river and up a very steep pinch, which seemed both odd and unfair!?!  We gritted our teeth and pushed on.


Finally!  We reached the lookout to the Falls at 12.20pm, just about at our physical limits, and congratulated ourselves and our 50 and 60 year old bodies for making it.  There seems to be a track leading onwards and upwards into the Tiers, no thanks!

The Falls were in full flow and powerful, a lovely sight. The sun was shining, it was just perfect. 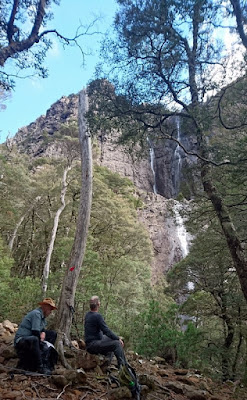 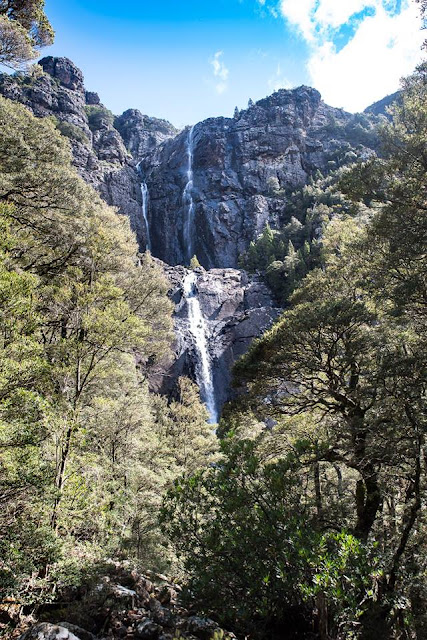 After a light but yummy picnic lunch and a bit of steaming off in the sun, we set off on the return trail at 12.55pm.  The downhill going, over the afore-mentioned rocks and roots, required good concentration, and our knees and ankles were put to the test.

We filled our water bottles at a rushing creek on the way down - George described the taste as nectar. 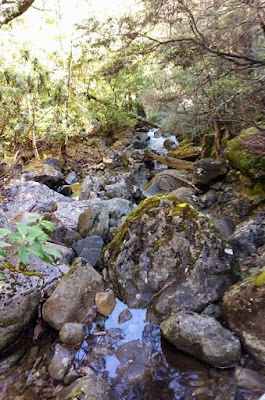 It was a great relief to return to the lower level of gentle grades, soft leaf litter paths and tinkling river rapids off to the side. We made it back to the carpark at 3.30pm (total walk time, including lunch stop - 6h 15min), well pleased with ourselves and very glad that we had seen the beautiful track and Meander Falls.  There are a number of other tracks in that area that might bear investigation at another time....