Sunday had been predicted to be wet, which we thought was pretty OK as we were planning to be on the Arcadia II for most of our outing.  After another big breakfast (scrambled eggs and salmon this time!) and the obligatory coffee, we sorted out what we were going to wear (boots or shoes was the main question). Then we ambled down to the river to where the Arcadia was waiting for us. 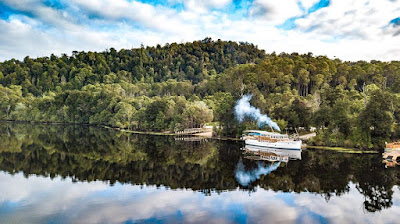 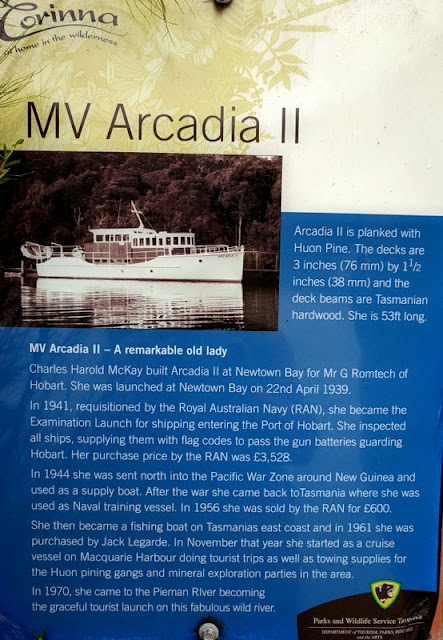 Our captain was Les Simms, a busy master mariner who operates tourist sailings out of St Helens and also spends three months a year in Antarctica.  Melissa doubled as crew and tea lady.  The lovely old huon pine ship was well preserved and very comfortable.  The "Quessy 9" was the first group on board, so we naturally got the best seats (in our view). 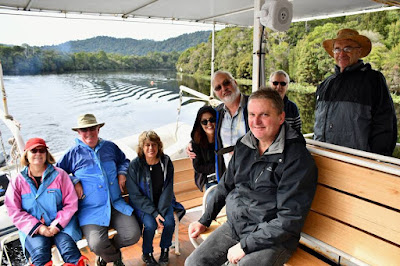 The views of the ancient rainforest, with heaps of huon pine, were enchanting.


Les was keen to share the steering, so Di had a go, then Lyn.

We were to have 90 minutes at the Pieman Heads, but that shrunk considerably when the captain instructed us to be back at the boat 20 minutes before departure.  Anyhow we set off expectantly, walking through the remote shacks of the fishing village towards the Southern Ocean. 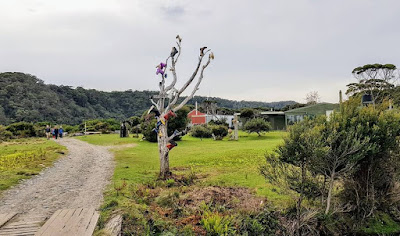 There were tonnes of logs and driftwood piled up around the mouth of the river, an odd sight.


It seemed strange that an easterly wind was blowing sand downriver and across the beach towards the sea.


The beach was pretty wild, with heavy surf and a treacherous bar at the heads. 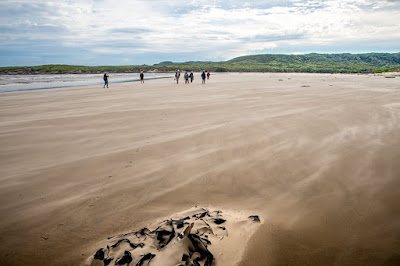 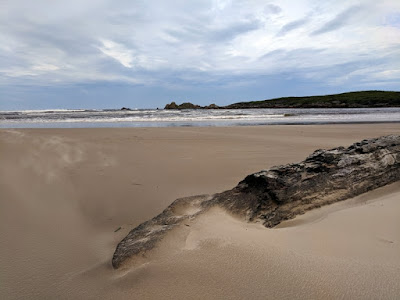 We found a sheltered spot to have some of our packed lunch (provided by Melissa) and enjoyed the beach experience for too short a time.


Soon it was time to start wending our way back towards the jetty. 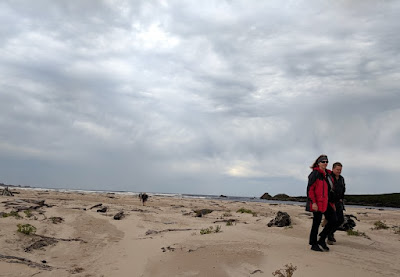 Meanwhile, the captain had picked up the group of walkers we'd met yesterday from the other side of the river, and we wound our way back upriver to Corinna.  Now the rain finally arrived, but we were safely under cover, yay!


Offloaded back at Corinna, we bade each other farewell.  Bob was off to explore Marrawah.  Wayne and Gerwyn were visiting family at Smithton and Burnie.  Kat, Philip, Lyn and George were heading back to Hobart via Sheffield and the Midlands Highway.  Di and Robert were still undecided but also heading north.

It had been a special experience, spending three days together in this isolated place, sharing amazing beautiful and wild places.  As a wonderful side benefit, we learnt more about our friends' (and our own?) quirks and unique contributions.  In short, we re-discovered why we are friends.  As we prepared to return to civilisation, tired but relaxed, we were plotting more getaways just like this one. 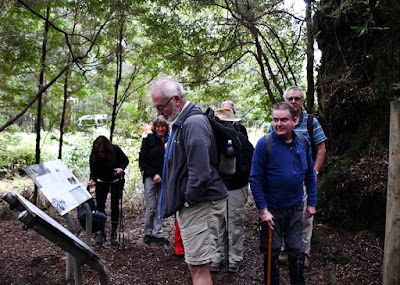 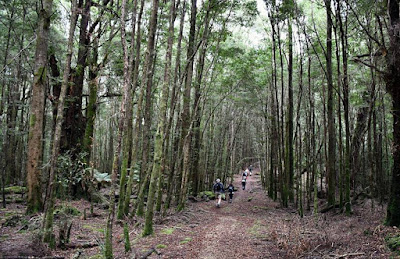 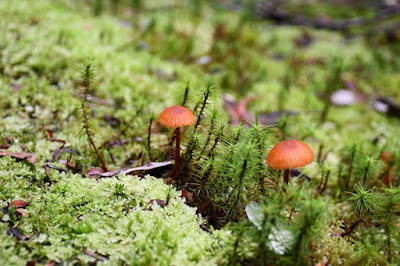 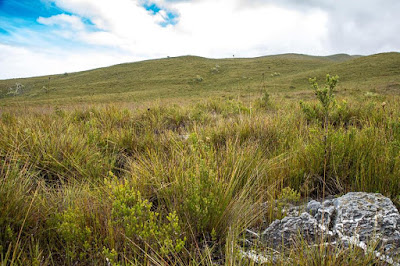 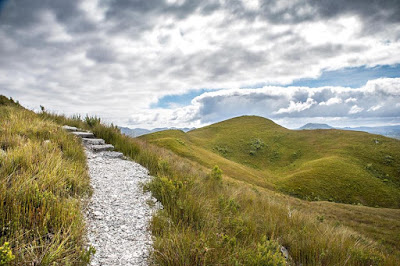 Lyn was the capable organiser of our first overnighter walk for this year.  She suggested Corinna, the remote ex-mining and piners' village on the West coast, and investigated how we could cram the most into a three day (two nights) weekend.   After some shuffling of dates and walkers, we were finally settled for the weekend of Friday 6 - Sunday 8 April.  The "Quessy Nine" was Lyn, Bob, George, Di, Robert, Wayne, Gerwyn, Kat and Philip.  Our basic plan was to drive up on the Friday, do a short walk on arrival, climb Mt Donaldson on the Saturday, and take the river cruise to Pieman Heads on the Sunday, heading home after that.

We set out on Friday morning, in four vehicles, ranging in occupancy from one to four, due to different plans post the weekend.  Our first meetup was to be in Queenstown for lunch, at the Tracks Cafe at 12.30pm.  With immaculate timing, we all arrived very close to 12.30!   For Di and Robert for example, this had involved leaving West Hobart at 8.50am, driving through New Norfolk at 9.30am (where the sign said we should be in Queenstown in 3 hours, perfect!), and crossing the "East West Divide" at King William Saddle at 11.30am.


Tracks Cafe turned out to be right at the railway station (fair enough), nicely presented, with good service and large helpings.  Rain arrived while we were still eating, not a good portent, but it had cleared well before we reached Zeehan, where the locals are working hard to retain some lovely old heritage.

We had a bit of fun at the Pieman River, working out how many trips we would need to get across the river on the Fatman Ferry.

Robert had time to visit the historic gravesite nearby:


No probs, we were across in two shifts, at $25 per vehicle.

Meanwhile, on the other side of the river, it seems the locals get a bit of fun out of the behaviour of visitors arriving at the village and encountering the river: 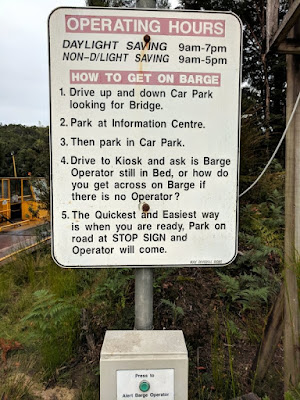 The pub/reception/shop/restaurant is handily placed just where you arrive coming off the ferry.  We checked in and were sent straight across the road (it's the only road in Corinna) to The Old Pub, which is now converted into visitor accommodation.


In discussion, we never came to agreement about whether this was in fact the original pub, as there had definitely been one on the other side of the river too. But the building looks authentic - the rooms had old numbers on them, like a hotel or a boarding house. Even the stylishly decrepit bicycle out the front matches the one in the photo taken in the 1930's which is shown on the interpretation panel outside. 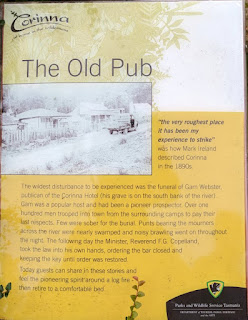 Interestingly, Robert later dug up a photo taken by his Dad in the 1990's - which shows the same building in a renovated state (Mission Brown paint and all).

Now the building has been artfully restored, with original style fence, rough sawn pine linings, original timber floors, historical photos and bush artefacts. The insulation, modern country kitchen, piped heating and cosy wood heater in the large living area made this a perfectly comfy place for us to stay. 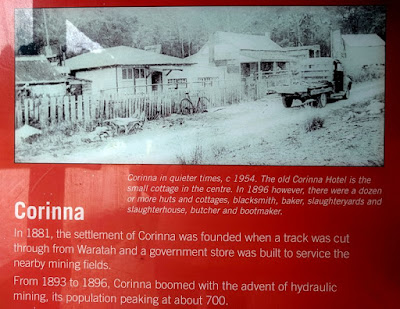 We learned that the film "Jewelled Nights" was filmed at Corinna in 1925, directed by and starring Louise Lovely as Elaine Fleetwood and Gordon Collingridge as Larry Salarno.  Apparently about 20 minutes of the film has been reconstructed and is shown daily at the Gaiety Theatre in Zeehan!

We only found this out after coming home and googling it.  One of the attractive features of Corinna is that there is no internet available.  So conversations can be longwinded and inconclusive.  And everyone is actually Present, not distracted by what's happening today in the outside world. 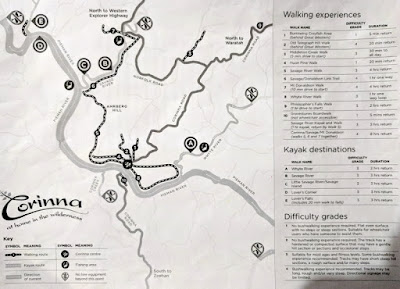 After we'd sorted out our rooms, and Philip had got the fire going, we were off to check out the Huon Pine Walk, one of Tassie's "60 Great Short Walks", rated at 30 minutes return.  We were joined now by Gerwyn's sister Kim and her partner Mili. 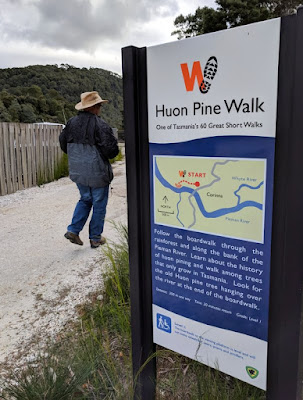 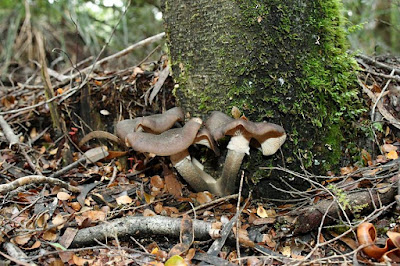 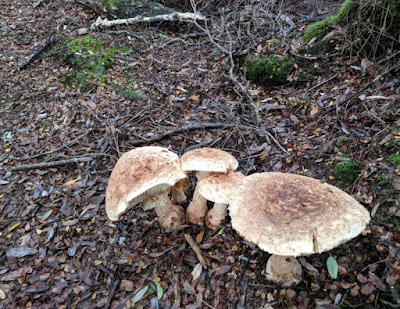 Some of us got carried away and walked for 45 minutes before deciding at the top of the hill that we'd had enough and should turn around. It only took 30 minutes to get back!

Then it was beer o'clock, which also featured champers and vast quantities of nibbles, so we lodged ourselves around the fire to relax and unwind.  Soon it was time for all hands to the gas barbie, cooking our meat to add to the yummy salads we had brought with us.  The meal turned into quite a feast, with huge dessert dishes from Wayne (his Polish neighbour's apple pie) and Lyn (sticky date pudding with caramel sauce). 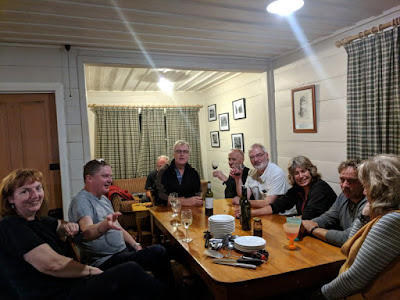 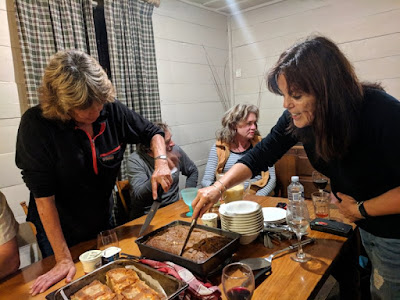 The jokes and quotable quotes started coming.  Bob had a few, including:  "why do toadstools grow so close together?   Because they don't need mushroom!",  and  "I was a dickhead when I was a kid, more so than I am now" - good to know.

After our first very enjoyable day, we turned into our neat little rooms for the night.  Wayne and Gerwyn slept in their campervan in the caravan park, along with Kim and Mili.  We had been advised that we may encounter a ghost called Lucy, so that added a touch of suspense to our first night.