This was a nice walk based around a picnic at Cape Queen Elizabeth, organised by Caroline.  We were a big party:  Caroline, James, Bob, Catherine, Peter, Di, Robert, Kat, Philip, Lyn, Angie.  It was a pretty hot and windy day, and we were surprised to find there was no cleared or sheltered picnic spot on the Cape Queen Elizabeth headland, so we returned into the light bush below the headland to share a yummy gourmet spread amongst the trees.
4 hours return (Mars Bluff is 2 hrs return)
The walk commences at a 4WD track just north of the Bruny Island International Airport(!).

Likely ferries leave at Kettering at 9.30am and 11.05am and return from Bruny at 4.30pm and 5.30pm (Its not a long drive from the ferry terminal to the start of the walk). Would be financially best to car pool at least across on the ferry. On this trip we took the 11.05am and 5.30pm ferries.  Robert took the Easy Rider option.
The walk passes Big Lagoon, a waterbird haven in the Bruny Island Neck Game Reserve, and leads directly to Neck Beach. 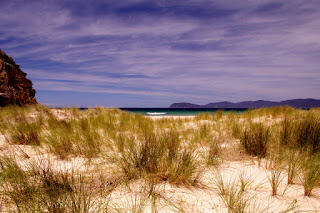 Neck Beach, Miles Beach and a little secluded beach in between are all pretty beaches of white sands and few people. 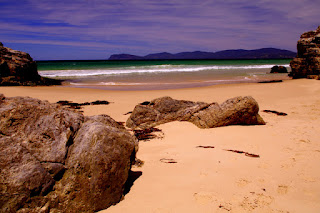 We found that the beach connection around Mars Bluff to Moorina Bay is only available at the lowest point of the tides (check the tide tables!).  Even near the low tide it is a minor cliff scramble or a swim to get around.  We weren't lucky enough on arrival and had to return up the track a little to take the path over Mars Bluff. 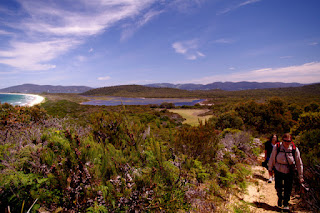 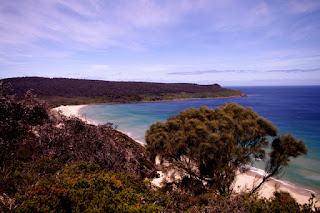 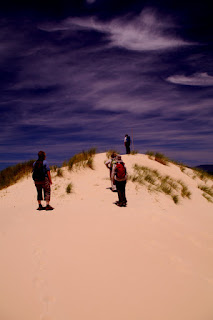 We descended onto Miles Beach and headed up the next headland of Cape Queen Elizabeth. On this headland the walking was easy and mostly under light bush cover.
On the way back we were close to low tide and we had a slightly scary climb around the rocks (anything to avoid climbing over Mars Bluff again!).  Bob took the wet option (on purpose). I don't think I was the only one to be a bit weary after this long-ish day out in the hot sun. 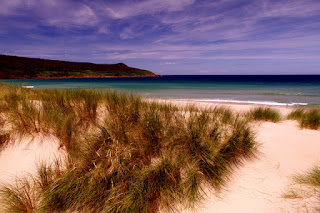