This months walk to McGregor Peak on the Forestier Peninsula was organised by Caroline. A  previous attempt at this walk was in pelting rain which obscured the views and covered everyone in leeches. So the group was  keen to schedule it again for a clear day, to take in the views and experience the Magic Forest.

On the last Sunday in April, Caroline, Warren, Bob and Lyn met at Sorell and travelled along the Arthur Highway 5 kms past Murdunna to a turnoff on the left called Petman Rd. There is a 'McGregors Peak' sign visible to the left after you turn off the highway. After another 500 metres on the unsealed road there is a small clearing on the right hand side which is the carpark for the beginning of the trail.

There is no signage for the carpark but we managed to find the track sign buried deep in the bushes. Subsequently, the beginning of the trail was also very overgrown and it required some effort to plough through.

The thick, dense scrub continued throughout the forest with many mossy logs, fallen trees and tree litter making for a slow and sometimes slippery ascent. The trail is well marked in this section with pink tape. 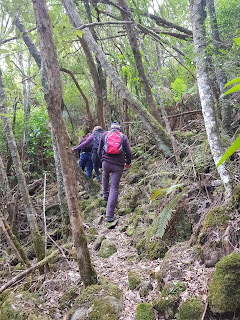 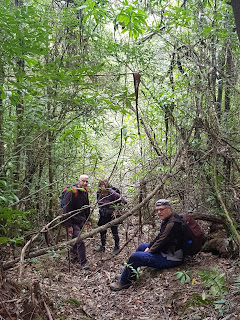 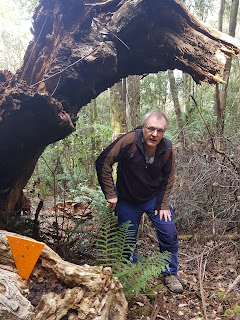 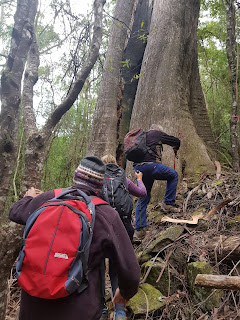 The notes say it should have taken 40 minutes to reach the fire tower but it took us almost 80 minutes due (mainly) to the state of the track. 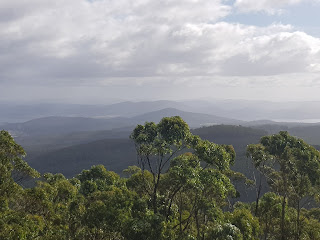 By the time we left the tower, the wind was picking up and howling over the ridge and storm clouds were moving over the hill. There were many huge dead trees on this part of the trail so we decided to head back and find a sheltered spot for lunch. 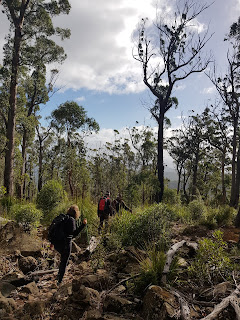 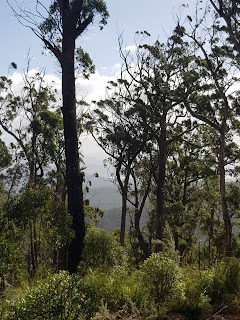 Rather than return the same way we decided to take the risk (without a good map) and follow the forestry road back down even if it meant a hike back along the highway to the car.

The road was a steep descent but made for faster progress. Unfortunately we were unable to follow the direction provided on google maps for a more direct route back to the carpark as we were unable to find a way through the dense bush.

And so we continued walking on what became Macgregor road to the highway, a few kilometres away from where we parked the car. Luckily,  Warren managed to get a lift to the car so that we had time for a well needed refreshment at the Dunalley Hotel to end the day.

All up we had a lovely walk through tall trees and dense forest with good company even though the wind and threatening rain cut it short and compromised the views we could have had. We discovered some interesting forestry trails, and made some mental notes for next time. Thank you to Caroline for organising.

It was noted that it would be better to commence the walk from the forestry gate on Macgregor road, even though it would be a long uphill climb at the beginning. Other observations along the way were the large amount of rubbish which has been dumped on Macgregor road (which is unsightly) and that the track is in need of serious maintenance.
Posted by Lyn