Our May 2019 walk happened on the first weekend of June.  The excellent plan was to base ourselves at the Lake Pedder Wilderness Lodge (the refurbished Hydro village at Strathgordon) and do some nice walks (or even canoeing) in the wild and beautiful South West National Park.

Our first challenge was the terrible bushfire season this summer.  Large tracts of the SouthWest World Heritage Area were badly burnt, and sadly this included the area immediately to the east and south of Lake Pedder. The fires have been extinguished but the trails we were most interested in investigating (like Lake Judd, and Mt Eliza) were closed for repair. Never mind, we thought we could do Mt Wedge or find some alternatives once we got there.

The second challenge was the weather.  Winter had arrived in Tassie just that week.  As we rolled along the Gordon River Road on Saturday morning, the mountains were obscured by lowering clouds and strange little mounds of snow appeared on the sides of the road.  Snow was in the weather forecast, as well as rain.  It was going to be cold and wet.

You know you've arrived when you come to the McPartlan Pass Canal, which links Lake Gordon and the enlarged Lake Pedder. 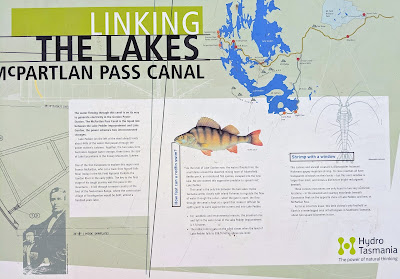 Kat, Philip, Bob, Lyn, Gary, Rachel, Di, Robert and Angie congregated at the Wilderness Lodge, curiously checking out the facilities.  Lyn had carefully booked three cabins, each with room for three or more guests, but it turned out that these were a bit spread out.  There are several neat little groups of three cabins, a good setup for a large group we thought, but we were told that two of the cabins in each group were smaller, only one bedroom.  Never mind, we ransacked our three allocated cabins for the required numbers of plates, glasses, cups and cutlery, and piled into Kat and Philip's cottage (the party cabin) for the first of many yummy shared meals.

The weather was holding up nicely so far, and our first excursion was to see the Gordon Dam.  En route we drove up to the Serpentine Lookout for excellent views over Lake Pedder. 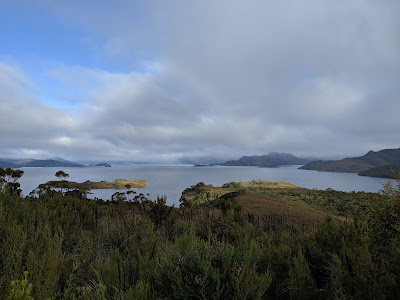 There are some white dots in the water on the RHS, these were some canoeists, involved in some event that weekend.

Next stop was the huge Gordon Dam. 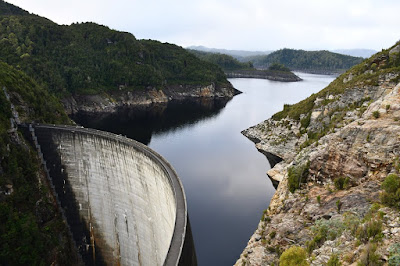 This dam was an engineering marvel due to its size and double-curvature when it was built in the early 1970's, and is still pretty awe-inspiring today. 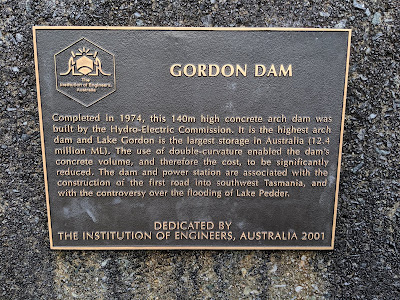 We couldn't resist the long walk down to the dam wall, and staring down to where a quiet trickle of water now follows the course of the original Gordon River downstream of the dam. 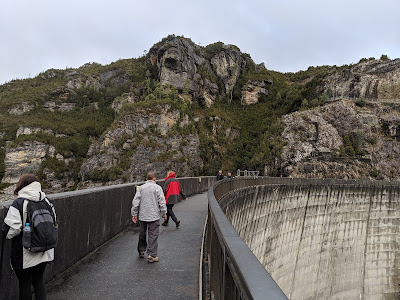 Back at the Lodge, we located the start of the nearby Rainforest Trail, just about 100m to the west of the entrance to the Lodge.  Short and sweet. 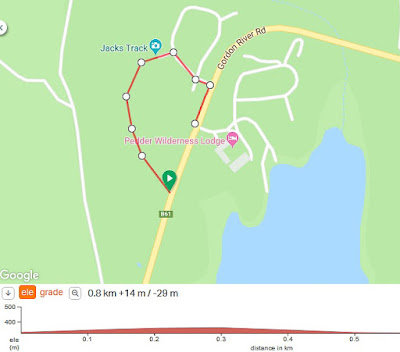 This is a pretty little cool temperate rainforest trail, looping around and back to the road, and it did take less than 30 minutes to walk! 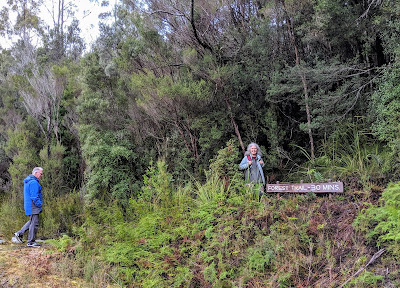 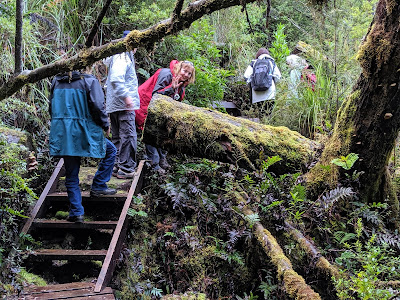 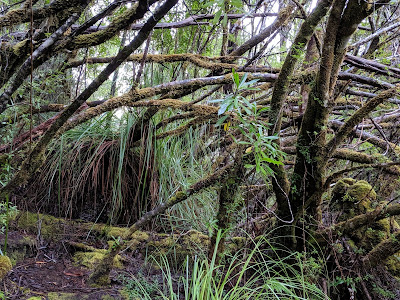 As darkness began to fall, it was time for pre-dinner nibbles and drinks. 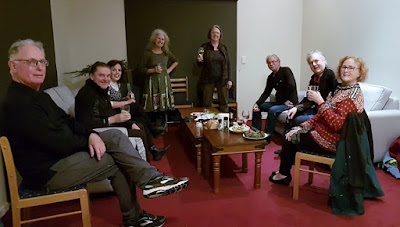 Then dinner - everyone had brought a contribution, with Lyn and Kat providing the core casserole dishes.  It was lovely.  The big hit tonight was Rachel's meringues with Persian Fairy Floss - wow! 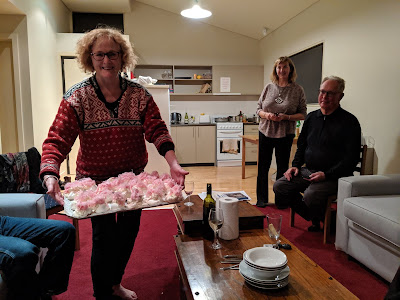 Sunday dawned with rain, and showers were forecast for the whole day.  Bummer.  Six of us (Di, Lyn, Angie, Kat, Philip and Bob) opted for a short morning walk up Jack's Track, which is basically a gravel access road up to a weather station on the top of the Twelvetrees Range.


Parking is on the lake side of the road, just past Ted's Beach campground.  We set off up the trail, and immediately of course the showers and rain began.  We managed to catch some views of Lake Pedder and Ted's Beach as we steadily gained altitude. 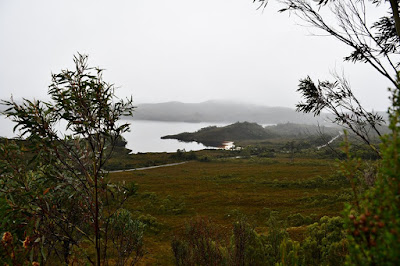 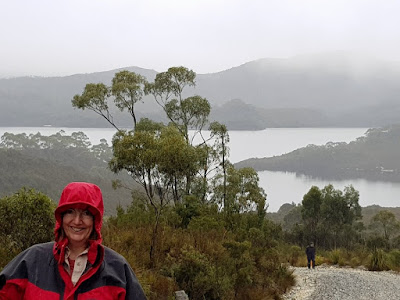 The road is a steady gentle climb, and has been cut through some pockets of glacial moraine. 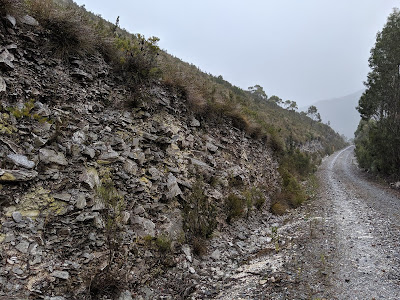 On all sides are mountain heath and buttongrass.

By about halfway up we were into the clouds, with the views disappearing fast.  Half the crew decided that they were sodden enough and the rest of the climb was not worth the effort.  Di, Lyn and Angie continued upwards. 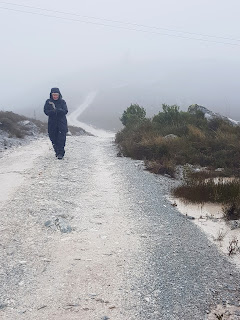 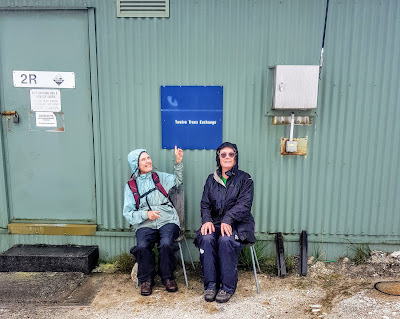 It was about 65 minutes going up and 55 minutes coming down.

We took a look at Ted's Beach on the way back, quite pretty and looks like a nice camping spot. 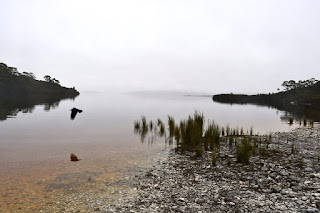 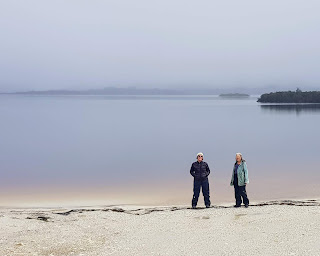 A warm shower and we were ready for another cosy lunch in the cabin, not out in the rain!   Afterwards, with the weather not getting any better, we ambled over to the lounge to hang out in company for a while. It was time for the manager to feed the local Green Rosellas. 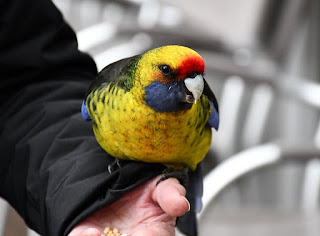 They were very friendly! 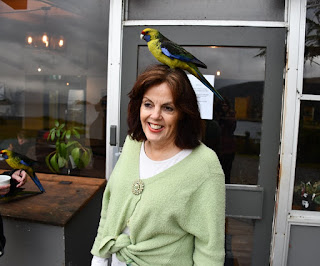 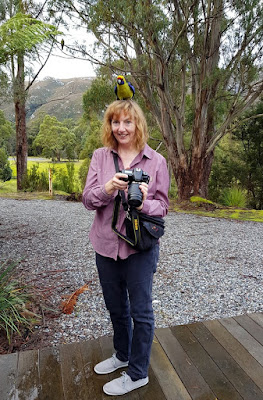 The views over the lake were nice, the bar was well stocked, and eventually (after some prodding!) the manager lit the wood fire.

We had dinner at the restaurant, and were very happy with our meals.  Then it was back to the cabin for coffee and Lyn's apple crumble.  And Kat's tokay.  It's a hard life.

On Monday we saw blue sky again, but it was time to head home.   We got some lovely views as we left.


We were looking for the access to the Mt Wedge trail on our way back, but didn't see any signs.  So if wanting to do this walk, best to navigate via maps and road distances.